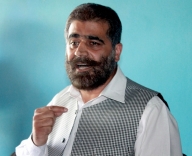 Calling the arrests “revengeful and arbitrary”, the Hurriyat leadership called for a shutdown in the Valley on Tuesday.

Altaf is the son-in-law of hardline Hurriyat leader Syed Ali Shah Geelani, who advocates Jammu and Kashmir’s merger with Pakistan, while Islam is a close aide of moderate Hurriyat leader Mirwaiz Umar Farooq. Akbar is the spokesperson for the Geelani-led Hurriyat.

The six, who were arrested from Srinagar, were later flown to Delhi. They will be presented before Special NIA Judge at the Patiala House Courts on Tuesday, an NIA official said, adding their custody would be sought for further questioning.

The arrested persons have been booked on charges of criminal conspiracy and abetting waging war against the Indian State.

The official refused to divulge details about the new evidences collected by the NIA but confirmed that more people could be arrested as the agency collects more proof.

He also did not rule out the possibility of issuing summons to other Hurriyat leaders, including Geelani and JKLF leader Muhammad Yasin Malik who gave the call for the ‘Kashmir Bandh’ to condemn what they called were the “revengeful, arbitrary, and illegal arrests”.

While New Delhi has for decades accused Islamabad of funding, arming and training Kashmiri separatists, it is the first time so many senior members of the Hurriyat Conference have been arrested on charges of receiving money from Pakistan.

The Geelani-led Hurriyat suspended Nayeem Khan after he confessed in a TV sting that Hurriyat leaders had been receiving funds from Pakistan for subversive activities in the Valley.

The NIA had registered a case on May 30 against separatist leaders, including members of the Hurriyat, who have been acting in connivance with militants of outlawed terrorist groups Hizbul Mujahideen, Dukhtaran-e-Millat, Lashkar-e-Taiba and others for raising and receiving funds.

Investigators said the funds were received by the separatists through illegal means, including hawala channels, for funding separatist and terrorist activities in Jammu and Kashmir and for causing disruption in Kashmir through street protests, burning of schools, damaging public properties and waging war against India.

The NIA had questioned the arrested persons. Altaf was questioned earlier in Delhi for nearly two weeks.

In pursuance of the FIR, the NIA in June conducted raids in Srinagar, Jammu, Delhi and Haryana and seized “incriminating” evidence against those involved in receiving funds, acting as intermediaries, and final beneficiaries of funds coming from Pakistan.

The NIA FIR names Hafiz Muhammad Saeed, the Pakistan-based chief of Jamaat-ud Dawah, the front of the banned Lashkar-e-Taiba (LeT), as an accused, besides organisations such as the Hurriyat Conference, Hizbul Mujahideen, and Dukhtaran-e-Millat.

During the raids, the NIA had seized unaccounted for account books, Rs 2 crore, and letterheads of banned terrorist groups, including the LeT and Hizbul.