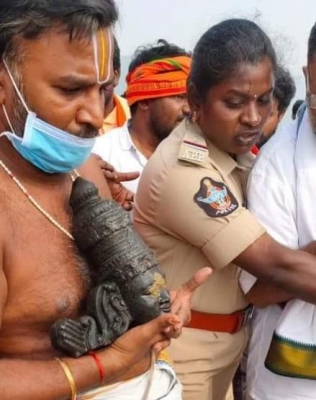 Amaravati– A series of incidents of vandalism of Hindu temples in Andhra Pradesh has triggered public outrage and demands from the opposition parties for stringent action even as Chief Minister Y. S. Jagan Mohan Reddy promised that the desecrations will not be tolerated.

In the latest incidents Lord Subrahmanya’s idol in Sri Vigneshwara temple in Rajahmundry was found in a desecrated condition while Sri Komalamma Paadaalu on Paderu Ghat road in Visakhapatnam agency area were found damaged on Friday.

Police has registered the cases and initiated the investigations. The vandalism is suspected to have taken place on the intervening night of December 31 and January 1.

The latest incidents came to light even as the desecration of 400-year-old idol of Lord Ram in Ramatheertham temple of Vizianagaram district triggered tension.

The priests of Sita Lakshmana Kodandarama on Tuesday found the doors of the ancient temple broken. The idol in the sanctum sanctorum was beheaded and the severed portion was recovered from the nearby pond the next day.

Police have formed five teams to probe the incident and nab the culprits.

These are not the only incidents. Last week, Lord Krishna temple in Darsi town was desecrated. Devotees lodged a complaint after finding flesh inside the temple and blood stains on the walls on December 22.

Police said it was an act of mischief by a drunk man, and not by any political party or group.

In September a ‘Nandi’ idol was vandalised in a temple in Chittoor district. The police suspect that the vandals had broken open the idol after rumours that gold had been poured into the idol.

The BJP called for ‘Chalo Ramatheertham’ programme on Friday to protest against the repeated desecration of temples.

The incidents led to a war of words between ruling and opposition parties. YSR Congress Party Rajya Sabha member Vijay Sai Reddy said he suspected the role of TDP president N Chandrababu Naidu in the Ramatheertham incident. He alleged that the TDP leaders resorted to the act in a bid to divert the attention of the people.

Cabinet minister Botcha Satyanarayana rubbished the allegations that Hindu temples were under threat during the YSRC regime and slammed the BJP for making baseless allegations against the government for political gain. “Is not Rama our God? Do BJP leaders even know where the temple is?” he asked.

“Defacing Hindu deities continue in Andhra Pradesh. Now it’s Lord Subramanya idol in Rajahmundry. But the anger of Hindu devotees is falling on deaf ears. Who’s trying to undermine sentiments of Hindus? The ignorant state government will have to pay a huge price for this,” he said.

He stated that every attack on temples in the state is testing Hindus’ patience.

“Authorities have not arrested anyone responsible for attacking Uttarandhra Ayodhya temple so far,” he said

The BJP leader compared the incident with the Taliban’s destruction of giant Buddha statues in Bamiyan and called on people to condemn the desecration.

Chandrababu Naidu said that nobody is safe under YSRCP rule. “The spate of attacks on temples itself had proven that even God isn’t safe in Andhra Pradesh,” said the former Chief Minister.

He claimed that over 120 attacks took place on temples during the last 19 months and over 23 idols were demolished recently in six temples at Pithapuram.

Jana Sena led by actor-turned-politician Pawan Kalyan demanded CBI probe into the series of incidents of attacks on temples, desecration of idols and destruction of temple chariots.

Rebel MP of YSRCP K. Raghu Ramakrishna Raju has written a letter to Prime Minister Narendra Modi, urging him to depute a central team to investigate incidents of attacks on temples and ‘bring to book the culprits including the functionaries of the government in the state.’

He wrote that there have been over 100 attacks on Hindu temple in the state and in recent days decades old chariots were burnt down in three temples.

He alleged that members of Hindu organisations protesting vandalism were brutally arrested and assaulted and not allowed to come on the roads even in limited number under the garb of corona.

The MP wrote that not a single person has been arrested for this wanton vandalisation of sacred idols and other symbols such as decades old chariots belonging to important temples and in one of two incidents apprehended were passed off as insane and warranting no action.

Chief Minister Jagan Mohan Reddy on Thursday said perpetrators of attacks on temples will not be spared and directed police to take stringent action against the vandals.

He termed the destruction of idols atrocious and said god will certainly punish those who keep messing with temples and idols. He directed the police to step up surveillance to prevent attacks on temples. (IANS)