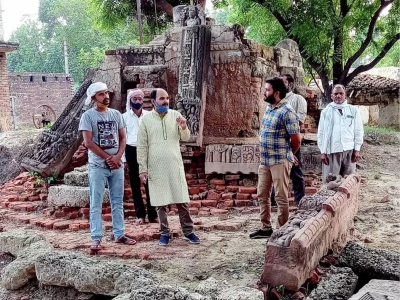 A joint team of the state tourism department and Uttar Pradesh Project Corporation Limited has conducted a survey for the revival plan of the Shivganj temple.

The villagers, under the banner of Bhayharan Nath Dham Kshetriya Vikas Sansthan, began the initiative by preserving idols, pillars and structures of the ancient Surya temple. They even removed encroachments near the temple site.

Samaj Shekhar, general secretary of the Sansthan, said that the team of tourism department picked up the ancient Sun temple after the state government moved the proposal to develop areas associated with ancient saints and sages in the state.

Shekhar said that a group of villagers had initiated steps to revive Sun temple built in the eighth century, and even held a series of meetings with the officials concerned.

“Majority of the people do not even have the knowledge of the existence of the Sun temple in this remote village of Pratapgarh district. Our Sansthan came forward to apprise people about the ruins of the historical edifice and sought their assistance to develop and maintain the area in and around the temple,” he told reporters.

According to sources, a team of Archaeological Survey of India (ASI) had visited the spot in 2011 and registered seven of its remains, directing gram panchayat of Gaura to follow the rules under the Antiquities and Art Act, 1972.

The ASI had said the temple dated back to the pre-medieval period.

Puneet Pandey, supervisor (Pratapgarh), Uttar Pradesh Project Corporation Limited, said that there are plans to develop the area as a religious tourist spot and a work plan is being prepared for the same. (IANS)