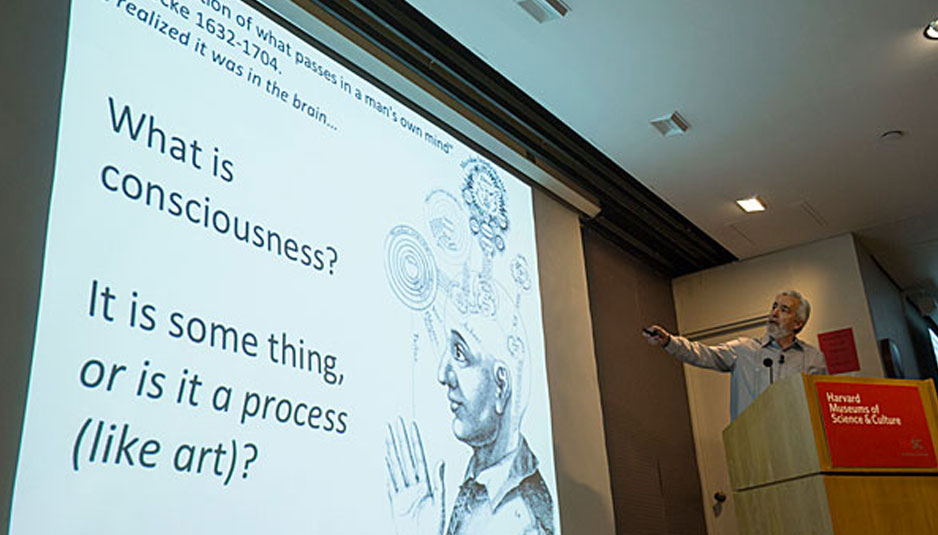 Consciousness — our sense of ourselves in the world — seems at first glance to be a profoundly human trait, the basis of civilization. But its roots may rest in biology and social behaviors we share not only with other primates, but possibly with many other living things.

That was the subject of a talk given on Monday by Brian D. Farrell, a biology professor and the director of the David Rockefeller Center for Latin American Studies. Speaking to an overflow crowd at the Geological Lecture Hall, Farrell drew from social sciences and the humanities to discuss the development as well as the meaning of consciousness, specifically referencing the work of a pair of Harvard giants from the 19th and 20th centuries, psychologist William James and ethnobotanist Richard Evans Schultes.

Even before his post-talk discussion with Davíd Carrasco, the Neil L. Rudenstine Professor of the Study of Latin America at the Divinity School, Farrell was mixing science with mysticism and art with molecular biology.

To introduce his multidisciplinary approach, Farrell began by quoting James, who cast himself as a naturalist before essentially creating the field of psychology. Although James had been wooed from the arts to the sciences by his interest in empiricism, said Farrell, the author of “The Varieties of Religious Experience” was careful to point out that not everything can be either directly experienced or proved. “A compass is more useful than a map,” James famously wrote, a line that would direct Farrell’s far-ranging talk.

It was James who first imagined consciousness as a stream. Working from this image, it is easy to see how science and the humanities can play a role in clarifying the concept, Farrell said.

The talk cited the work of Michael Graziano, a professor of psychology and neuroscience at Princeton, whose attention schema theory looks at how we choose to process and prioritize input from our senses. This can be either “top-down,” a conscious choice, or “bottom-up,” as when a loud noise startles us, firing the instincts.

But to act, we must be aware of ourselves — of who we are separate from the environment. Is that, then, what defines human consciousness? Winging through the works of biologists from Harvard’s E.O. Wilson to Francis Crick, who co-discovered the structure of the DNA molecule, Farrell explored the fallacy of that idea. Frogs, for example, have a sense of themselves. Studies of oxytocin and eye contact show that mice can feel each other’s pain. Even fish can remember when other fish cheat — as in the case of a wrasse, which will refrain from biting the client fish it is cleaning when other potential clients are watching.

One key may be socialization. Noting the correlation between brain size and sociality, Farrell explored the idea that sociality may help us solve problems. It may also allow us to imagine the experience of the other — or of a creator, opening the door to a discussion of faith and mysticism.

Indeed, the idea of mystical experience connecting to consciousness is an ancient one. Although most recently popularized by the likes of Aldous Huxley and onetime Harvard professor Timothy Leary, psychedelic substances were originally used by shamans seeking a greater sense of both the divine and the self. Neurobiology may even support this line of inquiry: the hallucinogenic psilocybin, for one, does seem to increase connections among certain parts of the brain, Farrell noted. Does this mean it increases consciousness?

Perhaps not. “The best things are the eternal things,” he concluded, adding that the goal is not “altered states, but altered traits.” Music and the arts, for example, have long been known to improve health, as have friendships and community — that idea of sociality again.

And with that, Farrell brought the discussion back to the arts and perhaps the most powerful knowable truth: “What we touch, touches us.” Or, to quote Keats, as he did, “Beauty is truth, truth beauty.”