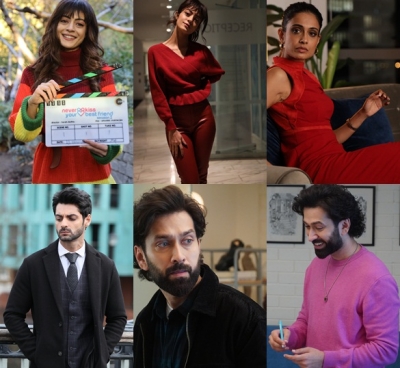 Season 2 of this franchise is Chapter 2 in the lives of its protagonists, Tanie and Sumer, who were best friends.

In the previous edition, they kissed and then parted ways after a silly attempted kiss was misconstrued for cheating, which led to the birth of this edition. This eight-episode rom-com takes off from where it left earlier.

In the first episode, juggling between Mumbai and London could be a bit unsettling, but as the narrative settles in London, life gets streamlined, and we get to witness Tanie and Sumer lead their own lives, romancing another set of individuals while pining for their first love, once again.

The characterization in the series is a bit over-the-top, especially with Tanie being the giddy-headed girl, confused with where life is taking her. Her career as a writer is questionable, yet destiny brings her close to Sumer, the promising director who still has faith in her writing skills.

They team up to churn a romantic web show for a production house helmed by Lavanya and her estranged brother Rajiv.

The narrative soon gives way to a dreary menage a quatre at their workplace, which leads to heartbreaks and heart mends.

Running parallel to Tanie and Sumer’s tale is the romantic fare of Tanie’s uncle Bitu Mama.

Under the skilful direction of Harsh Dedhia, we get into the heads of the lovebirds as he directs the series with a frothy light-touch flair. While the series lacks any sort of artistic authority, there’s an ironic elegance to the show, with Tanie constantly breaking the fourth wall (looking into the camera and talking to the audience), which may be disconcerting to some.

Also, while most scenes are bright capturing, excellent moments in silos, they don’t mesh seamlessly in the narrative, and the mush dialogues are just too cliched.

The on-screen chemistry of the characters is palpable. Anya Singh as Tanie is charming, and so is Nakuul Mehta as Sumer, together they make an ideal pair of best friends who, at times, are amusing when they aren’t brooding.

Karan Wahi, as the actor Karan in the proposed web show, is steadfast in his histrionics as a brilliant actor insecure in love. Deepti Bhatnagar as his progressive mother who runs a restaurant in London is simply pleasant.

Jaaved Jaaferi as the demure and low-keyed Bitu Mama whose performance range from likably cartoonish to stone-faced is bad, but never quite boring.

Niki Walia as Tanie’s mom and Bitu’s sister Happy, is typical Punjabi in her demeanour, and she essays her role effortlessly.

Sarah Jane Dias and Sapna Pabbi are short-changed by the script. Their stories do not have the depth to showcase their talent or tether the audience to them.

Overall, the series has a whole lot of trivia and very little substance, but folks love trivia. (IANS)