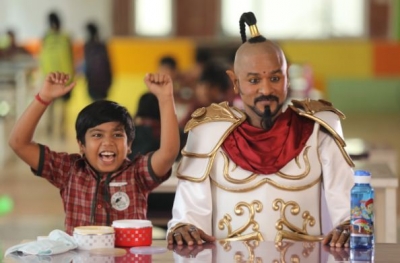 Director N. Ragavan, who made the highly enjoyable ‘Manja Pai’, returns this time with a fantasy film for kids. Not only is the film enjoyable, it also has a couple of significant points to make.

‘My Dear Bhootham’ begins with the story of Karkimuki (Prabhu Deva), the king of spirits who rules the spirit world in a just and fair manner.

The spirits are happy and satisfied with Karkimuki’s just rule, but the king himself has an unfulfilled wish. He longs for a child. After a point, his prayers are answered and he is blessed with a son who loves him unconditionally.

Karkimuki is overjoyed and spends time playing with his son. One day, he takes his son to another world to play and it so happens that the son disturbs the penance of a seer who has been meditating for thousands of years.

The seer, angry that the effort of thousands of years had gone waste, is about to curse the boy when Karkimuki pleads on his son’s behalf for the seer’s forgiveness.

When the seer is unfilling to forgive, Karkimuki pleads that he be cursed instead of his son. The seer agrees and curses Karkimuki to turn into a statue and be buried in the earth for thousands of years.

The only way Karkimuki can return to the spirit realm and meet his son again is when the person who finds the toy on earth and sets him free, also finds the secret chant hidden in the toy and utters it within a time period of 48 days. Otherwise, he will perish for good.

It is under these circumstances that the toy is found by a young boy called Thirunavukkarasar( Master Ashwanth).

Thirunavukkarasar, the son of a single parent, has a stammering problem and is hated by schoolmates and loathed by teachers. What happens when Karkimuki enters Thirunavukkarasar’s life is what the film is all about.

The film gets off to a crisp start with Karkimuki’s story being narrated through animation. However, when the focus shifts to Thirunavukkarasar’s life, the story begins to lose steam a little.

But it soon picks up pace with the entry of Karkimuki into Thirunavukkarasar’s life. By the time the second half begins, the film has you interested. From that point on to right till the end, the film has your undivided attention.

The credit for keeping the film engaging must go to two people. One, the director for narrating a good, interesting story with a number of valuable takeaways for kids and two, to actor Prabhu Deva, who does a great job as the king of spirits.

Prabhu Deva’s antics and his dance moves perfectly fit the role and comes up with a sterling performance to steal the limelight. Young Ashwanth impresses with his brilliant depiction of a child with a stammering problem.

Imman’s background score and Senthil Kumar’s visuals are added pluses for the film.

Full marks to director Ragavan for making a clean, neat, enjoyable fantasy entertainer that parents can enjoy with their kids. (IANS)