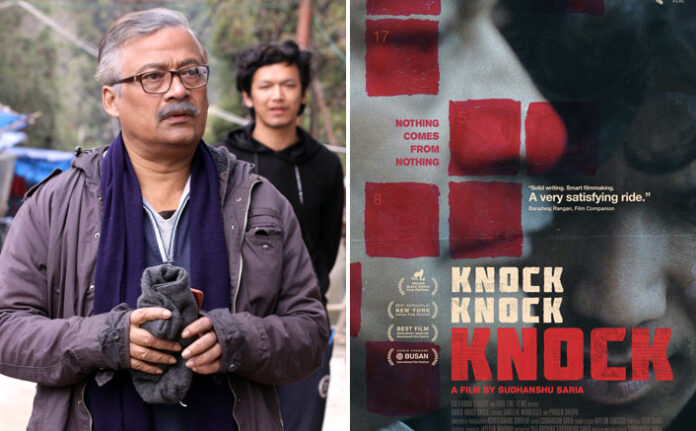 Brevity is not always an essential attribute in cinema, while setting up narrative and aesthetic brilliance. Which is what makes the short film an exciting challenge. The ability to create an entire fictional universe within minutes is a craft quite unlike any other format of cinematic storytelling.

Writer-director Sudhanshu Saria’s Knock Knock Knock aims to take that challenge up by a level, because most of what would constitute as traditional plot progression happens on a cerebral plane rather than a physical one, and between just two characters.

We meet an elderly gentleman who is simply addressed all through the film’s runtime as Dada (Shantilal Mukherjee), who sits at a corner table of a quaint cafe in Darjeeling, designing crosswords. He takes off a month every year from his hectic grind in Kolkata, we are told, to be in Darjeeling and pursue his passion and pastime.

Dada’s self-imposed lonely calm is disturbed one afternoon when a young guy (Phuden Sherpa) at the cafe notices the crossword he is meticulously creating. The 20-something youngster, a tattoo artiste, cannot help but come forward to introduce himself, eager to strike a friendship with the older man.

Dada is reluctant at first but the youngster, lively and unconventional in his ability to gauge everything around, is unlike the millions he normally abhors. A connection of wits is soon established between the two.

Saria’s treatment is quietly effective, as the young tattoo artiste lets himself into Dada’s extremely private world. These are two men who are similar yet different. As creative artistes, they realise there is an intricate likeness that binds their respective arts. Yet, the older man’s reluctance to let the world impinge upon his private space is in contrast to the youngster’s willingness to reach out.

The filmmaker uses that last-mentioned notion to introduce a dark edge into the narrative, and also insert a dose of unsettling suspense. The film has an uncompromising approach — there is no attempt to simplify the psychological subtext that propels its storytelling. It works for the narrative.

Saria’s primary triumph lies in his writing. He has successfully defined his protagonists within a short runtime without the aid of a back story. In turn, that lets him extract flawless performances from two excellent artistes who have largely been unknown to most of India.

Shantilal Mukherjee, a successful character actor in Bengali cinema and television who owes his roots to theatre, is phenomenal in his understated approach while essaying of Dada’s complex mannerisms. Phuden Sherpa balances his on-screen traits as an extrovert youngster and a social misfit with ease. Their behavioral traits, in contrast and yet in harmony, set up an irresistible watch.

Knock Knock Knock ends on a note that may not find favour with all. It could open up a debate over whether the protagonist’s stance about the purpose of life is valid.

Come to think of it, good films are meant to open up debates about life, not silence them. Saria has done so in 38 minutes. (IANS)