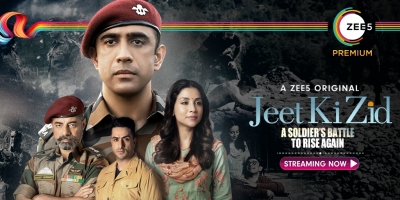 It’s easy to like Jeet Ki Zid. The show talks of patriotism and valour, it celebrates will power to triumph against all odds. Importantly, it has the often underrated Amit Sadh bringing alive a remarkable life on screen.

Jeet Ki Zid could obviously be expected to deliver a minimum quality with those traits. With more accomplished writing and execution, though, it could have been a great show.

The seven-episode series is based on the true story of Special Forces Officer Major Deependra Singh Sengar, or Deep, played by Amit Sadh, who was left paralysed waist down during Kargil War. While doctors did not give him much of a chance, Deep fought against all odds to spring back in life.

Siddharth Mishra’s writing divides the narrative into three timelines interwoven with each other. We see Deep as a youngster in the late eighties, when his brother dies in a terror strike. The second track, set in the mid-nineties, follows the days when he trained at the Special Forces Training School. Finally there is his posting in Kashmir, at the onset of Kargil War in 1999.

A highlight at the end of every episode is an appearance by Major Sengar himself, along with wife Jaya, to take you behind the scenes of the action that unfolds in the particular episode. In a few cases, the Major’s wrap-up commentary is the most interesting bit of the episode, more than the fictional drama that unfolds.

The series blends emotion, drama and military action to come up with a decent package, though it could have gone slower on hint of jingoism that it can’t seem to escape in parts.

Through its three timelines, the narrative sets up a story of parallel battles that the protagonist wages. Deep’s primary struggle is at Special Forces Training School, to prove he is worthy of a place in the exclusive outfit. A hulked-up Sadh does impressively while capturing the nuances of his protagonist, as Deep strives to top a brutal training regime overseen by Colonel Ranjeet Chaudhary (Sushant SIngh).

The training school track occupies most of the narrative across the episodes, since it lets the audience understand what prepared Deep to face all that he endures.

Despite its noble intentions, the series could seem flawed. While a lot of focus is given to the role of Major Deep Sengar, Amrita Puri as his wife Jaya remains half-baked. We meet her as the girl who gets engaged to Deep before he goes to war, and then she defies all societal pressure and married him despite his accident. We are told she is a teacher. The character is inadequately fleshed out, beyond her purpose of being Deep’s support system.

Similarly, Sushant Singh as the ruthless training school instructor is too unidimensional, after inciting initial interest as a man who will go to any cruel extent to prepare his wards for their calling.

Despite these snarls, Jeet Ki Zid stands out for a special reason, apart from celebrating the triumph of human will power. We have had many films and shows that depict the horrors of war. This is an effort that shows the punishing routine that goes into psychologically and physically preparing the men who will go out there and withstand such horrors at the border. A sequence where Sushant Singh’s Colonel Chaudhary prepares Deep for enemy torture by keeping him spreadeagled on an ice slab, and then administering electric shock immediately afterwards, underlines the fact with cold precision. (IANS)