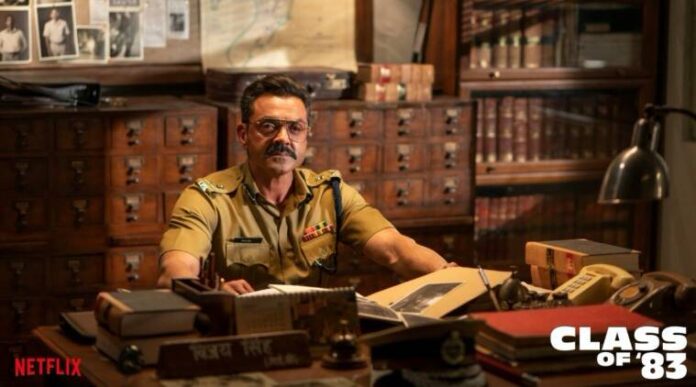 Twenty-five years into his career, Bobby Deol can at least claim to have given a debut performance worth attention. Class Of 83 technically qualifies as a debut — it is his first bow on OTT — and his act is far more impressive than the film itself. Of course, it is also far more impressive than what Bobby managed as a greenhorn all those years ago with his big screen debut, Barsaat.

In “Aurangzeb” director Atul Sabharwal’s new film, Bobby plays Vijay Singh, a cop haunted by ghosts of his past, and consigned to a job profile that obviously spells a comedown in life. Bobby manages to bring a quiet intensity to the role, for most parts rising above a screenplay that defeats the film’s purpose with its lackluster pace.

The sheer scarcity of drama in the writing (Abhijeet Deshpande) stumps you because this is a cops-versus-gangsters movie, a genre that normally never fails to thrill. This is about hardy cops taking on the ruthless mob and, based on real-life incidents, it throws in crooked politicians, big money and policemen gone rogue. Above all there is Mumbai, a metropolis forever on the edge and watching over everything like a silent character.

You have watched all such elements come together in numerous films, ever since the formula patented itself with realistic relish in “Satya” or “Ab Tak Chhappan”. Yet, far from updating the genre, “Class of 83” actually takes us back in time, when Bollywood screenwriting was yet to evolve into an exciting creative process.

Based on Hussain Zaidi’s book, “The Class Of 83”, the film’s narrative casts Bobby as Vijay Singh, a hero in the police force once upon a time, who has been shunted to Nashik police training academy as dean of the institution. Vijay’s professional eclipse is paralleled by a personal tragedy that has turned him cold and cynical, so much so he never seems too bothered about his duty. Forget taking classes, he is hardly ever seen in the campus. Vijay is a legend in the force for his past actions. For his students he is a legend they have only heard of.

A sense of purpose in Vijay’s life returns when he does go to the classroom. He picks the five weakest students who, he senses, have a street-smart acumen at cracking cases, and yet have not scored well academically, and decides to hone them into a shadow squad of sorts — one that will ‘eliminate’ criminals without necessarily staying within the limits of law.

“Class Of 83” talks of the fine line between law and lawlessness, and tries highlighting the edges where the demarcation blurs. The outcome is far from convincing, because the narrative is never really engaging enough. The writing and direction lack the urgency a film of this genre demands.

The film is set in the eighties, and full marks to the technicians for bringing alive the milieu of the era. Mario Poljac’s camerawork is particularly interesting, capturing the essence in grim, gritty hues. Yet, the texture of the narrative remains colourless, failing to match such interesting tech-specs.

Bobby Deol tries his best to salvage a plot that moves at a pace that tests your patience. There is not much that any cast can do if the storytelling is flawed. In “Class Of 83”, Bobby leads a cast that plays out the roles with admirable restraint and realism. Sadly, that is not enough to hold your attention, in a film that simply lets a good concept go waste. (IANS)