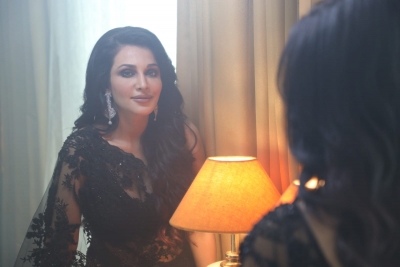 At its best, ’36 Farm House’ is a satirical comedy on a superficial level that does not even work as a good, moral and cautionary tale.

Delving on the universal theme of ‘Some Steal For Need – Some Steal For Greed’, the narrative proceeds to tell us the story of three sons trying their best to change their mother’s will to their respective advantage. To what lengths they go to achieve their goal forms the crux of this story.

Set during the 2020 lockdown, the film appears to be a quickie trying to pass off the story as a relevant tale of our times.

The narrative begins with migrants returning to their roots. Jay Prakash (Sanjay Mishra), aka JP, a smooth-talking opportunist, and father of two grown-up children, with the help of Benny (Ashwini Kalsekar), the housekeeper of 36 Farm House, manages to wriggle his way as a chef, into the house of Eighty-five-year-old Padmini Raj Singh (Madhuri Bhatia) the owner of 36 Farm House and its 300-acre property who had bequeathed her assets to her oldest son Raunak (Vijay Raaz). JP gets the job purely because he convinced Raunak that he is a lone soul, unmarried, and with no family members to claim his own.

While JP is nearly settling in 36 Farm House, he learns about Benny’s devious plan of stealing from her employers. During the same time, his son Harry (Amol Parashar), who was an assistant to Designer Manish Malhotra by happenstance, meets the designer Antra (Barkha Singh), who is heading to her grandmother Padmini’s residence. Together they come to 36 Farm House.

To add to the chaos is JP’s concerned and worried wife Shantishree, who lands up at 36 Farm House in search of her husband while an investigation into the murder of a young lawyer, who was deputed by Padmini’s younger sons- Gajendra and Virendra, to get their mother’s will changed, looms large over 36 Farm House.

But the plot, instead of focusing on the three sons, factors in several other characters with their motive, thereby diluting the narrative and reducing it into a farce. The writing as well as the direction, are purely perfunctory, very mundane, and mediocre to digest. The humour too- only elicits chuckles.

On the performance front, every actor is within their comfort zone. Therefore they deliver staid and routine performances.

The songs in the film have the flavour of the 1990s and are so reminiscent of Subhash Ghai’s repertoire.

Mounted with moderate production values, the film is a bit disappointing since it comes from the stable of Subhash Ghai’s Mukta Arts Ltd. (IANS)