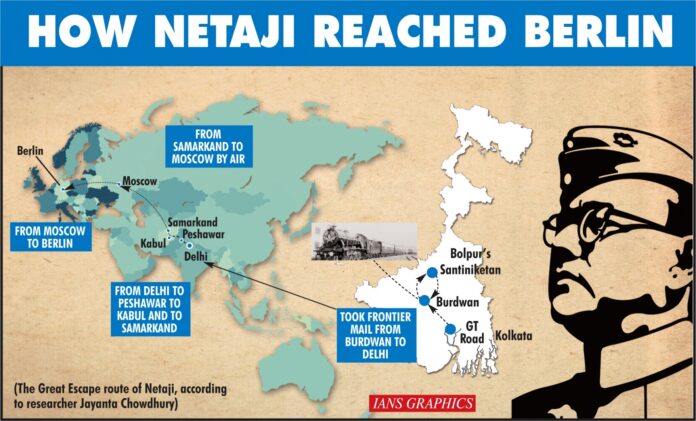 Kolkata–In 1941, 44-year-old Subhas Chandra Bose was under house arrest with the police guarding the entire area outside his Elgin Road residence in south Kolkata.

According to noted Netaji researcher Jayanta Chowdhury, the black German Wanderer sedan which Bose rode for his great escape on January 16, 1941 rolled out in the dark. It took AJC Bose Road from Elgin Road and then the Mahatma Gandhi Road and crossed the Hooghly River via Howrah Bridge to enter the adjacent Howrah district.

The car then took GT Road to reach Burdwan district, located about 100 km from the state capital. According to the information available with IANS, Bose went to Santiniketan in Bolpur in Birbhum district where he took the blessings from Nobel laureate Rabindranath Tagore before setting out for Delhi and again returned to Burdwan district.

“From Burdwan he took a train namely ‘Frontier Mail’ and reached Delhi in disguise of Mohammed Ziauddin. I don’t support the theory of Bose taking the Kalka Mail from Gomoh station in what is now Jharkhand and reaching Delhi. It is completely concocted,” Chowdhury, who was also one of the deponents in the Justice Mukherjee Commission, told IANS.

The Centre has decided to celebrate Netaji’s birth anniversary on January 23 as ‘Parakram Diwas’ from now onwards. On Wednesday, Indian Railways also renamed the Howrah-Kalka Mail as ‘Netaji Express’ ahead of Netaji’s 125th birth anniversary celebrations.

Railway Minister Piyush Goyal recently tweeted: “Netaji’s ‘prakram’ (valour) put India on the express route of freedom and development. I am thrilled to celebrate his birth anniversary with the introduction of ‘Netaji Express’.”

“From Delhi, Netaji first reached Peshawar in Pakistan, and from there to Kabul where he had to wait for about 48 days. From Kabul he reached Samarkand and from there he went to Moscow by air, as per the information available with us. And finally he reached Berlin in March 1941,” Chowdhury said.

He added that there are many theories about Bose’s great escape route from his Elgin Road home. “But as per proofs, Bose was driven out by one of his close associates, Sardar Niranjan Singh Talib, and not by Sisir Bose,” he said.

Bose’s great grandniece Rajyashree Chaudhuri also supported the version, saying that the Sikh community had helped Bose to escape from India. The account given by Sisir Bose barely has any relevance. According to sources, Netaji’s brother Sarat Bose had apparently suggested Bose that the escape should seem like an ordinary journey in order to hoodwink the guarding policemen outside the house.

“The Dissentient Report of Suresh Chandra Bose on Bose’s mystery also said that Sisir Bose had no knowledge of Bose’s next plan of action. Sisir Bose’s account of catching the Kalka Mail from Gomoh railway station is contradictory to the railways’ timetable of 1941. It is all trash and does not really match the then time table,” Chaudhuri added. (IANS)