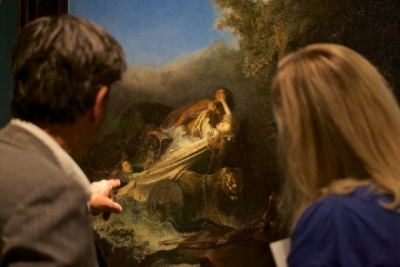 Amsterdam– A previously hidden sketch has been discovered beneath the paint of Dutch Golden Age painter Rembrandt’s “The Night Watch”, offering a glimpse into the genesis of the masterpiece created in 1642.

After two-and-a-half years of meticulous mapping of the famous painting using the most advanced imaging techniques and computer technology, the researchers have finally presented their findings, Xinhua news agency reported.

The most significant of these was a sketch beneath the paint, one of the first steps in the making of the masterpiece.

“The discovery of the sketch represents a breakthrough,” Taco Dibbits, director of the Rijksmuseum in Amsterdam, told a press conference on Wednesday.

“We always suspected Rembrandt must have made a sketch on the canvas before embarking on this incredible complex composition, but we didn’t have the evidence,” Dibbits said.

The sketch confirmed the understanding of experts that Dutch master Rembrandt started composing his paintings spontaneously directly on the canvas.

“We are currently able to look beneath the surface of the paint better than ever before and now we have the proof,” Dibbits explained.

“It gives us a real understanding for the first time of how the painting was made. It is fascinating to see Rembrandt searching for the right composition. We have discovered the genesis of ‘The Night Watch’,” the director said.

“The Night Watch” belongs to the city of Amsterdam and has been part of the Rijksmuseum’s collection since 1808. It was Rembrandt’s first and only painting of a militia group.

Commissioned in 1642 by the Mayor and leader of the Civic Guard of Amsterdam, Frans Banninck Cocq, it is a group portrait of his shooting company.

Renovation started in 2019, the year that marked the 350th anniversary of the artist’s death.

According to the researchers, Rembrandt must have spent considerable time searching for the ideal composition for this large painting.

Rembrandt seemed quite confident about his composition, as he only made some small changes. However, previous studies of “The Night Watch” had already revealed dozens of modifications made by the artist himself.

One example is that Rembrandt originally painted feathers for the helmet of militiaman Claes van Cruijsbergen, but later he painted them over.

Scans revealed that the artist also adjusted the leg position of another person, Rombout Kemp.

In addition, there are indications of the presence of an additional sword, and it has become clear that Rembrandt originally painted a larger number of spears.

“Each new detail gives us another insight into Rembrandt’s creative process, his original idea, his thought processes and his material and artistic choices,” said Petria Noble, the Rijksmuseum’s head of paintings conservation.

Besides revealing Rembrandt’s working methods, this detailed examination of “The Night Watch” has shed a great deal of light on the condition of the painting.

In many areas, the paint is still in an excellent state. Other areas, however, are in poor condition, according to the researchers.

One of the areas showing signs of deterioration is around the dog in the painting. The researchers had thought that the discoloration of the dog was the result of a degradation of the paint. They have now revealed that attrition in this part of the painting has led to more exposure of the newly discovered light-coloured sketch.

“All these discoveries now prompt us to look at Rembrandt’s other paintings with different eyes… We now know what we should be looking for,” Noble added. (IANS)