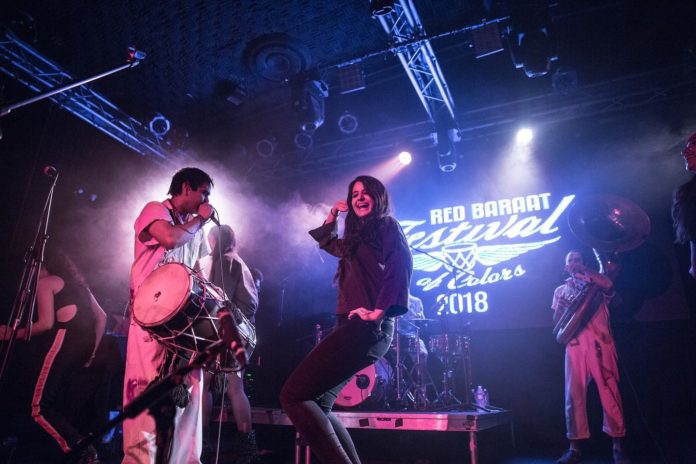 BOSTON — Global Arts Live and Bowery Boston present Red Baraat Festival of Colors on Sunday, March 8, 7:30pm at the Sinclair, 52 Church St., Cambridge. Tickets are $28 in advance $35 day of, general admission, 18+.
For tickets and information call Global Arts Live at 617.876.4275 or buy online at globalartslive.org.
Red Baraat is a pioneering band from Brooklyn, New York. Conceived by dhol player Sunny Jain, the group has drawn worldwide praise for its singular sound, a merging of hard-driving North Indian bhangra with elements of hip-hop, jazz, and raw punk energy. Red Baraat Festival of Colors is a celebration of Holi, a Hindu holiday marked by public gatherings of families, friends, and strangers rejoicing in song, dance, and the exchange of “colors.” Red Baraat Festival of Colors is an immersive celebration with music, dance, and visuals. Anjali Taneja will open.
Red Baraat Festival of Colors debuted in 2012 at a sold out Le Poisson Rouge in New York City and it has since expanded to over a dozen cities in the United States. Each year, bandleader and dhol player Sunny Jain curates a night of music highlighting the South Asian Diaspora through a diverse range of styles. Past festivals have included DJ Rekha, Falu, Radhe Radhe: Rites of Holi (a film by the late, award-winning filmmaker Prashant Bhargava, with score by Grammy-nominated composer Vijay Iyer), Vidya Vox, Brooklyn Raga Massive All-Stars, Rupa & The April Fishes, Rajna Swaminathan’s RAJAS, Mandeep Sethi, DJ Ushka, Vandana Jain, Parijat Desai Dance Company, DJ Ayes Cold, DJ Anjali, DJ Prashant, Madame Gandhi, Ganavya, Maieli, The Kominas, Shilpa Ray, Bhi Bhiman, Subhi, Zeshan B, Punjabtronix, Women’s Raga Massive, Heems (Das Racist/Swet Shop Boys).
Created with no less a purposeful agenda than manifesting joy and unity in all people, Red Baraat’s spirit is worn brightly on its sweaty and hard-worked sleeve. The band’s 2018 album, Sound The People, hit the top 10 on the World Music Charts Europe and was heralded in the US as the anthem soundtrack for the South Asian diaspora by US hipster, indie-rock magazine Stereogum. Red Baraat’s 2nd album, Shruggy Ji, debuted in 2013 at #1 on the Billboard World Music charts in the US and propelled the band on a world tour that has yet to stop. They’ve performed at Bonnaroo, Austin City Limits, WOMAD, globalFEST, Lincoln Center, New Orleans Jazz Fest, along with clubs, theatres, and arts centers. Along the way they sold out rooms as diverse as the Luxembourg Philharmonic and the New York City’s legendary rock club Bowery Ballroom, and performed at the request of The White House (Obama), TED and the Olympic Games (London).
The band’s most recent highlight performances include headlining Peter Gabriel’s renowned WOMAD Festival in Cáceres, Spain in front of 10,000 people, performing at the Vienna Konzerthaus (Philharmonie) in Austria, getting the crowd jumping at Sines Festival in Portugal and several sold out club shows.
But even as it’s clear that Red Baraat has built a startling history of performances in iconic settings, the band’s bread and butter remains the sweaty clubs, festivals, packed performing arts centers, and college auditoriums that keep the band on the road all over the world for the last several years. It’s here where Red Baraat does what it does best: commune with their audience in a joyful, near hedonistic celebration of music and dance, which, tellingly, draws a crowd even more diverse than the players on stage. The universality of what Red Baraat does is undeniable. And this is no happy accident. It is the product of intention and design.
Jain says, “The band…our songs…are addressing the multiplicity of viewpoints. There’s ‘Zindabad,’ which means ‘Long Live’ in Hindi. In that song, we’re saying that we celebrate life, we celebrate devotion — but we also celebrate agitation and revolution. If we can unite people of all backgrounds and ethnicities to partake in the exuberance of life through the universal language of music, then life is that much sweeter.”
For more information please visit:
www.redbaraat.com