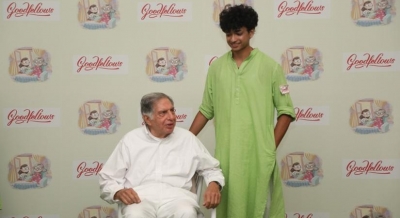 New Delhi– Goodfellows, a young start-up that provides authentic meaningful companionship to seniors through young, educated graduates that are vetted intensely for empathy and emotional intelligence, was launched on Wednesday. It is a for-profit start-up based on the concept of intergenerational friendships.

Shantanu Naidu, General Manager in the office of Ratan N. Tata, said, “The start-up emphasises that companionship means different things to different people. To some, it may mean watching a movie, narrating stories from the past, going on a walk, or having quiet company sitting around doing nothing together, and we are here to accommodate it all. In its beta phase, we discovered how organically the Grandpals bonded with the Goodfellows. Tata’s investment in our venture further is a huge source of encouragement to our dedication to this concept.”

Commenting on the investment, Ratan N. Tata, Chairman, Emeritus of Tata Sons, said, “The bonds between the two generations created by Goodfellows are very meaningful and are helping to address an important social issue In India. I hope the investment helps the young team at Goodfellows grow.”

The launch was attended by Ratan Tata as well as some youth icons, including Shriya Pilgaonkar, Artist; Viraj Ghelani, Content Creator; with their grandparents and with existing “Grandpals” who have subscribed to the service.

Over the past six months, the start up has taken time to complete a successful beta and will now be available in Mumbai with Pune, Chennai and Bangalore as the next target cities. During the beta testing phase, it received a positive response with over 800 applications from young graduates looking to be employed here, of which a shortlisted cohort of 20 provided companionship to the elderly in Mumbai.

According to the team, it has been a challenging but rewarding task to ensure that the “Goodfellows” bond with their Grandpals in an authentic and meaningful way and not just cosmetically. This requires several rounds of vetting and some in-house psychometric tests to choose the best graduates.

In terms of services offered, a Goodfellow does whatever a grandkid would do. There are 15 million elderlies in India living alone, either due to loss of a partner, or families moving away for unavoidable work reasons. While many of them have caregivers or start-ups for utilitarian needs such as e-commerce, the issue of loneliness or lack of company has been the primary reason for deteriorating mental and physical health.

In addition to this, Goodfellows also hosts monthly events curated to the enjoyment and engagement of the Grandpals who participate, making the bond deeper and enjoyable in a different environment. This allows the Grandpals to meet each other as well as more young graduates, building a sense of community.

The business model is a freemium subscription model. The first month is free with only the goal of having the Grandpal experience this service, since it’s hard to understand the concept without actually going through it. The second month onward is a small subscription fee that has been decided based on the limited affordability of pensioners. The fee is in place for two important reasons:

The Goodfellows have been vetted for empathy and have an affinity towards the elderlies, but like any other graduate, they would like to be secure about their finances and do their best for the seniors. To give them dignified, respectable salaries for choosing this profession, this is a paid service. This also ensures that chosen few are retained, groomed and have a career ladder while giving back to society.

A subscription model guarantees that when the seniors bond with the goodfellows, we do not keep rotating the graduate visiting them since that does not allow enough time or emotional attention to form an authentic and real bond. When we make a friend we want to see the same friend often. A new person every time will prevent this from happening.

Several non-profit models in this space have failed since volunteering happens as per the availability of volunteers and no one invests enough time with one senior to form an authentic bond. Once the desire is over, volunteers move away which impacts seniors gravely.

It offers short term internships as well as employment to graduates looking to find a job that allows them to apply their educational background in this space while having a sense of purpose or fulfilment from the work that they do. These graduates are given the autonomy to ideate and create and make the company their own. For example Ketki from Sophia College has been instrumental in refining the psychometric testing in order to “mine” more numbers of empathetic graduates into the organisation based on psychological evidence.

The major percentage of funds from investors are currently geared towards scaling up the human capital, which is a slow process since empathy cannot be vetted quickly or by the traditional recruiting process. In the near future, it will offer travel companions for seniors holding back from making trips due to lack of security or company, and also plans to extend its services to the handicap community facing similar or more challenges.

Artist Shriya Pilgaonkar, known for her outstanding role in ‘Mirzapur’, ‘The Broken News’, and ‘Guilty Minds’, said, “The stories and experiences our grandparents have to share with us are nothing less than invaluable. They have seen it all and probably have evolved with it more considering how much more they are open to understanding our generation, compared to our parents. Which makes for the most riveting conversations when we are together. My grandfather’s zest for life and travel, to date, keeps inspiring me and in some ways makes him one of my best friends too, as we go on adventures together.” The star was also present with her grandfather Arun Narayan Sabnis, who shared wise words.

Popular YouTuber, Sherry Shroff, who is also a former model and law student, appreciated the initiative, and said, “Often younger people may not have the privilege to grow up with their grandparents, and won’t know what they are missing. From that standpoint, Goodfellows is such a great initiative for not just the Grandpals, but also the youth, to get the chance to learn from the older generation, who have a treasure trove of knowledge to pass down.”

Known for his hilarious videos and reels with his sassy grandmother, Viraj Ghelani, content creator, said, “I owe so much of my success to my grandmother. I still struggle to fathom the breadth of knowledge she holds, from how the city of Mumbai came to exist, to watching the Independence movement come to life. I get to learn so much from her and it is truly a privilege to be loved and protected by a grandparent.”

Senior citizens can avail the services by signing-up on thegoodfellows.in or can give a missed call at +91-8779524307 or check out the Instagram handle. (IANS)

There is no need to give free food, Covid is over: Capitalmind CEO

93% of employers want to see soft skills on your resume