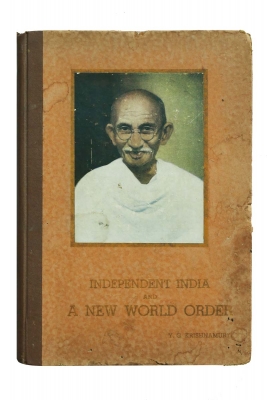 New Delhi– A collection of “rare and undocumented books printed in India between the 1920’s to 1960’s”, including Mahatma Gandhi’s ‘Young India’ and titles written by India’s first Prime Minister Jawaharlal Nehru, will go under the hammer at the Prinseps Nationalism Book Auction closing July 15, the auction house said on Monday.

According to the auction house, most of these titles “have not been offered for sale before” and are “first editions”, with few copies having survived. The auction offers a rare glimpse into pre-independence India, the period which gave rise to freedom fighters, ideologies, revolutionaries and renowned leaders.

Highlights from the auction, says the auctioneer, include the carefully collated writings of Gandhi, documenting his opinions and thoughts while organising the non-violence movement during the British Raj (‘Young India’ by Mohandas Karamchand Gandhi, 1922); and comprehensive documentation of Gandhi’s speeches during his struggle for independence (‘Speeches and Writings – Fourth Series’ by Mohandas Karamchand Gandhi, 1933).

It says in a statement: The catalogue comprises 63 lots collectively ranging from the pre-independence to the post-independence period, bringing alive a plethora of stories and narratives of distinctive political leaders, authors and philosophers. These literary assets will not merely guide Indians but the wider diaspora of people in the world to observe the greater picture of India’s struggle towards independence and freedom.

According to Prinseps founder and this auction’s curator Indrajit Chatterjee, the ‘Nationalism Book Auction’ brings “a collection of important texts to the market for the first time. As an auction house with research as our foundation, I am proud to offer a rare glimpse into pre-independent India through fine texts penned by the well-renowned personalities of the Indian freedom struggle”.

Alongside this, the auction house is hosting a series of auctions including a Modern Art Auction and an NFT auction of artworks by the radical 1950s artist Gobardhan Ash, from his ‘Avatars’ series. Prinseps’ will also be hosting a rare auction of Bhanu Athaiya’s sarees alongside a selection of NFTs based on her drawings and sketches. (IANS)