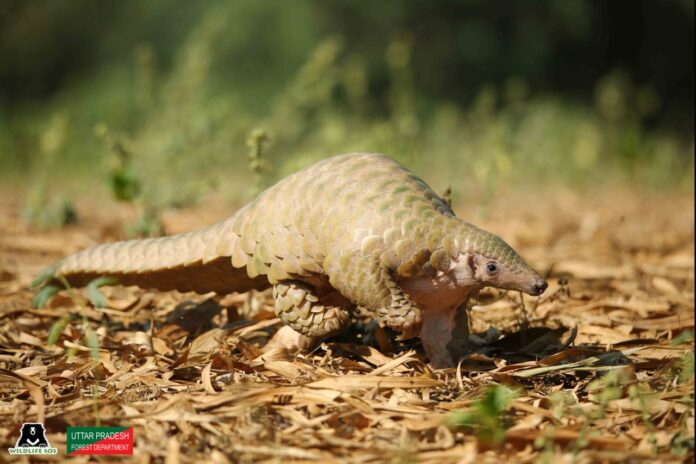 Agra–A rare and endangered Indian pangolin was rescued by the Wildlife SOS after it was seen wandering across a field in Bichpuri village, around 10 km from Agra city.

Being the world’s most trafficked animal, pangolins are under constant threat from poachers and sometimes they even fall victim to road accidents. The pangolin was successfully released back into its natural habitat by the Wildlife SOS under the guidance of the UP Forest Department.

A villager of Bichpuri who had found a ‘strange scaly, ball-shaped animal’ in his field informed the Wildlife SOS which sent its team to the spot.

The team members were surprised to find that the animal was in fact an Indian pangolin, also known as the thick-tailed pangolin or the scaly anteater. This rare species is protected under Schedule I of the Wildlife Protection Act, 1972 and is listed as ‘endangered’ on the IUCN Red Data List.

The pangolin was found curled up into a ball; this is a defence mechanism used when they feel threatened. Their body is entirely covered in scales (made up of keratin), that act as armour for their face and abdomen. As the small animal was lying completely vulnerable to threats such as predators and even poachers due to their high demand in the illegal wildlife trade, the Wildlife SOS team carefully transferred the pangolin to its transit facility.

After a few days of medical observation, the pangolin was successfully released back into the wild under the supervision of the Uttar Pradesh Forest Department.

Kartick Satyanarayan, Co-founder and CEO, Wildlife SOS, said, “Finding a rare animal like a pangolin in this area is a sign of excellent biodiversity. It’s heartening to find the animal in a healthy state and we are happy to see it safely returned to its natural habitat. Most people don’t even know that pangolins exist and that they are being pushed towards extinction at an alarming rate. Creating awareness and protection of this species is crucial to ensure their survival.”

Diwakar Srivastava, DCF, National Chambal Sanctuary, Agra, said, “Pangolins are extremely shy animals and are quite rarely sighted in the wild. Being a Schedule I species, they are given the same level of protection as tigers, elephants and leopards in India.”

Despite the pangolin being highly protected under Indian law (Wildlife Protection Act 1972) and under the Convention on International Trade in Endangered Species of Wild Flora and Fauna (CITES), it is illegally hunted and traded for its meat, a south-east Asian delicacy, and its scales, blood and other body parts are used for traditional Chinese medicine.