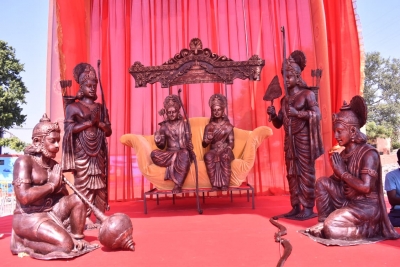 Ayodhya–As the construction work of the grand Ram temple in the city of Ayodhya in Uttar Pradesh is going on in full swing, its foundation work is likely to be completed in November 2021 and from December 2023, devotees will be able to worship ‘Ram Lala’ in the new grand temple dedicated to Lord Ram.

Gopal, the Vishwa Hindu Parishad (VHP) leader, who is looking after the construction of the Ram temple at Ayodhya, is a confidante of Champat Rai, the General Secretary of Shri Ram Janmabhoomi Teerth Kshetra Trust.

He said the Shri Ram Janmabhoomi Trust is trying to open the temple doors for the devotees by December 2023, before that the purpose of completing the construction of the temple is to place the deity Lord Ram here.

Talking to IANS, the VHP leader said the work on using the temple marbles made from granite been transported from Mirzapur and Bangalore will be started soon after completing the foundation work of the temple.

Informing about the stones being used for the construction of the temple, the VHP leader said granite is being transported specially from Bangalore. The stones used in the temple construction have been sent from Bansi Paharpur in Rajasthan and more such stones will be transported here.

He told that this temple will be of three storeys in which three floors of 20 feet each will be made followed by a shikhar. (IANS)

Liz Cheney bruised but undaunted in campaign against Donald Trump