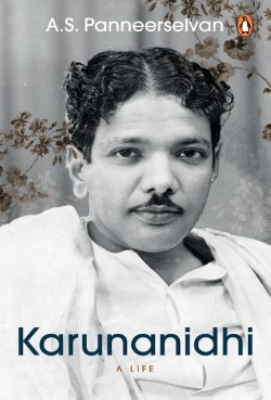 New Delhi– In “Karunanidhi: A Life” (Penguin), A.S. Panneerselvan tells the story of the man who became a metaphor for modern Tamil Nadu, where language, empowerment, self-respect, art, literary forms and films coalesced to lend a unique vibrancy to politics.

Writer-politician Muthuvel Karunanidhi is among the most important political leaders India has ever seen. He was the chief minister of Tamil Nadu for five terms and the leader of the Dravida Munnetra Kazhagam (DMK) for over five decades. He was ardent as a social reformer and unrelenting as an opposition leader.

On the political stage, his charisma and acerbic wit defined the rhetoric of Tamil Nadu. In the national arena, he was a keen and strategically useful facilitator for various coalition governments. On the international front, he was vocal about the Tamil question in Sri Lanka.

He left an indelible mark on the cultural landscape of India with his influence on linguistic politics. He believed in protecting not just the linguistic plurality of India but also its federal core. He was multifaceted and yet he seemed to be unknowable at times.

The book “does justice to the ambitious twin tasks undertaken by the biographer to tell the story of a man born and raised in deprivation, who suffered hardships and stigma on account of both his caste and class, but who “through sheer imagination, articulation, hard work and a zest for life transformed himself into a statesman and renegotiated power for millions and secured self-respect for them”; and through this story get “an insight into the workings of the modern Indian state”, N. Ram, former Editor-in-Chief of The Hindu, writes in the foreword.

A.S. Panneerselvan is currently the readers’ editor of The Hindu. He has served as the newspaper’s independent, full-time internal ombudsman since 2012. Apart from being a regular columnist, he is also an adjunct professor at the Asian College of Journalism, Chennai. His wide experience in both print and television journalism includes extensive reporting on conflicts in Sri Lanka, Kashmir and India’s north-east region.

A board member of the Organization of News Ombudsmen and Standards Editors representing Asia, he has also served as the steering committee member and vice chair of the Global Forum for Media Development between 2005 and 2018. He is a member of the governing board of the K.M. Adimoolam Foundation for Arts in Chennai and was a fellow of the Reuters Journalism Fellowship programme at the University of Oxford. Panneerselvan has lectured widely on politics and the media in the US and Europe.

This is the second biography of Karunanidhi to hit the stands in the last 12 months after “Karunanidhi ï¿½ The Definitve Biography” (Juggernaut) by noted Tamil journalist and author Vasanthi, who notes that in the rough and tumble of Tamil Nadu politics, Karunanidhi was a fighter to the end.

“And what a fighter he was too! Even after his death his spirit seemed to be fighting – fighting for the right to be buried next to his beloved mentor, C.N. Annadurai”.

That was the final battle that Karunanidhi won, Vasanthi writes.(IANS)