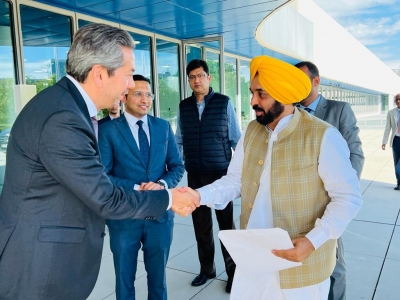 A decision to this effect was taken during the Chief Minister’s visit to the BMW headquarters here.

During the visit, Mann showcased Punjab government’s work to promote industry in the state after which BMW agreed to set up its auto component unit in state.

Buoyed over it, Mann said this will be the second unit of the company in India as already one such unit was operational in Chennai.

He said this will give a major boost to industrial growth of the state and open new vistas of employment for youth.

The Chief Minister also invited BMW to collaborate with the state in the e-mobility sector.

He was apprised that e-mobility is a major sector of focus for the auto giant which targets 50 per cent of its global sales to consist of fully electric vehicles by 2030 under the leadership of Chairman of the Board of Management, BMW AG, Oliver Zipse. (IANS)