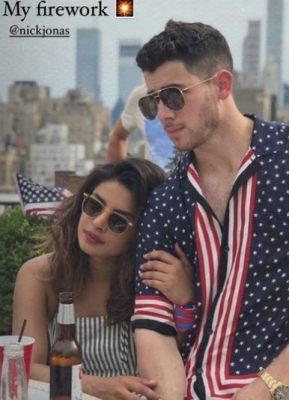 In a throwback picture Priyanka posted on her Instagram story on Monday according to India time, the actress is seen dressed in a grey and white striped dress paired with sunglasses. She holds on to Nick’s arm. The singer is dressed in a blue, red and white shirt, which somewhat matches the American flag. Priyanka, too, celebrates July 4, the American Day of Independence, in her caption.

“My firework @nickjonas.. Happy 4th of July #throwback,” she wrote as caption.

Priyanka was last seen on screen in the OTT film “The White Tiger”. The Ramin Bahrani directorial stars Adarsh Gourav and also features Rajkummar Rao in a pivotal role.