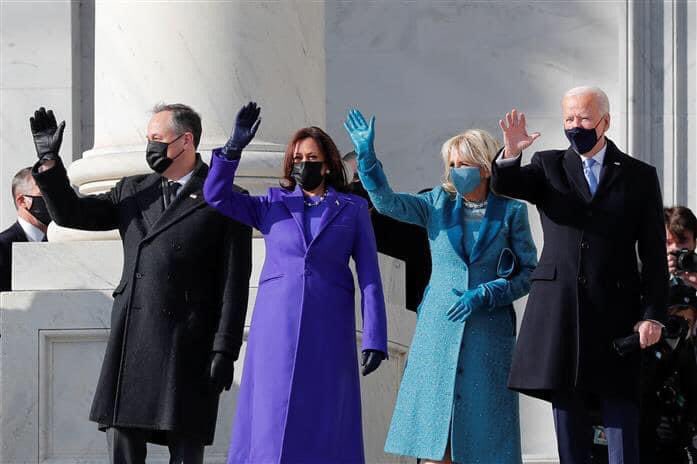 New Delhi–Over the past few months people have been asking the question why does fashion matter? Fashion matters for many reasons but at the heart of it, it is because fashion stands for something. What you wear speaks of who you are, especially if you are in the public eye, this becomes amplified.

Outfits worn by the First Lady on the day of the inauguration often end up in museums, becoming pieces of historic significance. Who can forget Jackie Kennedy’s Oleg Cassini blue suit with a matching pillbox hat or the yellow Isabel Toledo dress with olive green J Crew gloves that Michelle Obama wore. (Melania Trump’s “flaunt your labels” style of dressing serves as an example of how a lady should not dress, whether in the public eye or not). A First Lady’s inauguration outfit sets the tone for what the White House will stand for during her tenure. The designer, the colour and the footwear, all of it matters.

Dr. Jill Biden has been the Second Lady of America for eight years. She is an educator and will continue teaching at Northern Virginia Community College, a first for a First Lady. Dr. Biden is not the only lady in the White House, as Kamala Harris becomes the first woman to be the Vice President of America. Harris also has her own unique personal style.

When I look at the picture of Kamala Harris in her purple coat by Christopher John Rogers, the First Lady in an ocean blue ensemble by Markarian, standing alongside President Joe Biden in his navy blue Ralph Lauren suit, and Harris’s husband, Doug Emhoff, the Second Gentleman, in his grey Ralph Lauren, I cannot help but wonder if these women decided to work in harmony rather than compete? Are their ensembles a symbolic message of camaraderie which extends beyond fashion?

The two couples on the steps of the Capitol building, ushering in a new era in politics, says it all. The fact that both women chose independent American designers is a clear message. Dr. Biden’s choice of designer and colour was a welcome surprise, a label even those in the fashion may not have heard of Markarian. Her tweed coat and matching dress featured a slight shimmer and velvet details. Markarian has its studio in New York, its clothes are always made in the city and designer Alexandra O’Neill’s usual set of clients is much younger than Biden. The colour of this ensemble, ocean blue, signifies unity and stability. (The coat did seem to have some minor fit issues.)

For Harris, it was a Black designer with a strong voice in the LGBTQ community. Christopher John Rogers is seen as one of the emerging stars of American fashion. Her coat was clean cut, with no added embellishments its strong colour made an impact, no frills were needed. In the US, the colour Purple is traditionally seen as a symbol of bipartisanship, a mix of red and blue, colours of the Republican and Democratic parties respectively. Harris’s choice in colour was deliberate, many see it as a tribute to Shirley Chisholm, the first Black woman elected to Congress alongside being the colour of women’s suffrage movement. (I do hope Harris, being the first woman of colour to become Vice President, will give a fashionable nod to her Indian heritage soon).

Both women’s outfits worked so well together, yet each stood for something very different. This is how smart women use their personal style, they use it to celebrate what they stand for and what they believe in. These women are saying America’s future is bright and that the democratic nation is proud of both its traditions and its diversities.

There is a definite fashion lesson in it for all of us.

(The writer Sujata Assomull is an IANSlife columnist. Assomull is the author “100 Iconic Bollywood Costumes” and was the Founding Editor In Chief of Harper’s Bazaar, India.) IANS

Empowerment is learning to feel safe in your own skin: Nidhi Sunil