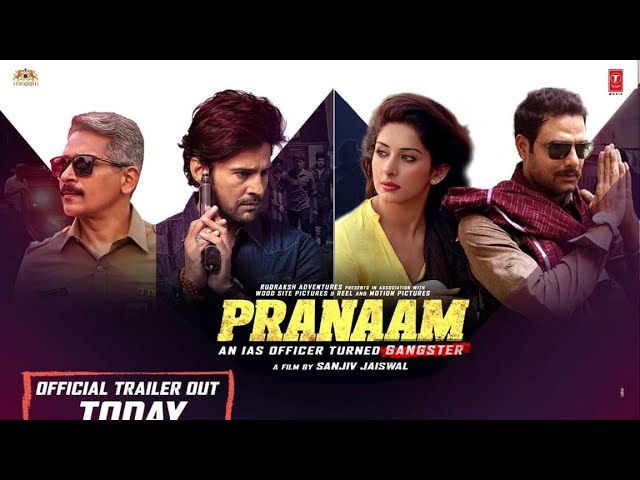 A peon’s son dreams of being an IAS officer, somewhere in heartland India. Twists in fate force him to cross paths with lawlessness. He ends up becoming a gangster.

Now when did you hear that story before? Three decades ago, most likely, when every other film was about the good guy ending up on the bad side of life owing to circumstances.

If “Pranaam” seems like a concept straight out of the eighties, the cast and crew have insisted that was the idea. Rajeev Khandelwal’s latest release strives to deliver a dash of the retro punch, hawking a suitably loud package of larger-than-life melodrama and violence. The film is blatant in the way it picks every cliche that you thought had become obsolete a while back.

Heartland socio-politics, ridden with class and caste divide, has not altered much over the decades, you could argue, which still makes this film topical despite changing trends of popular cinema. There would be a resonance of that reality in the film’s storyline.

The trouble is writer-director Sanjiv Jaiswal’s storytelling lacks novelty. Much of the build-up is about hero Ajay Singh (Khandelwal) courting Manjari (Sameksha). As the mandatory singing in the rain unfolds, you sense deja vu. The hero’s peon father (played by SM Zaheer) proudly declares, “Bahut jald mera beta collector ban jayega aur main usko salaam karunga”, and you know the dreamy assertion is meant to be an ominous indication that life will be far from rosy.

Casteism and class divide apart, this film also gives a nod to corruption in the education system. The plot essentially centres on examination paper leak, and how criminals, administrators, the police and politicians are all involved.

If the chain of events that spiral the hero down the vortex of crime fails to engage, it is because you have seen these things in a zillion films before. From Amitabh Bachchan and Vinod Khanna to Sunny Deol and Sanjay Dutt, once upon a time in Bollywood every action hero has already essayed this son of the soil with a heart of gold who is forced to pick up the gun.

Probably, they did it with more panache. Or, maybe, the concept was still fresh till back in their time, so it clicked.

“Pranaam” tries reinventing eighties action drama by mixing the cutting-edge technological advantage of new-age Bollywood with vintage melodrama and violence. However, writer-director Jaiswal overlooked a basic fact. Reinvention of a genre has to keep in mind changing cinematic tastes, too.

Such reinvention is often intelligently executed in Hollywood. Quentin Tarantino does it all the time, to take a random example. The trick, you are aware if you relish Tarantino fare regularly, lies in catering what worked once without distorting genre essence, and yet redefining it to suit evolved cinematic taste. So, “Django Unchained” reorganises the good old western by fusing it with blaxploitation drama. “Kill Bill” gives the classic martial arts movie a touch of woman power. “Inglourious Basterds” picks the vintage World War II drama and adds a wanton spoof quotient to it.

Jaiswal, perhaps, never had such lofty ambitions with his masala-patented retro action drama. But he could have at least avoided the tendency to remain stubbornly stuck in a cinematic time wrap.

The screen belongs to Rajeev Khandelwal all through, so it is left to him to strike some sort of screen presence and salvage the show.

Khandelwal is a fine actor, many past outings on screens big and small would testify. Here, he manages to lend an amount of heft to an otherwise predictable role. The problem is very little remains to be explored in this character stereotype after all these years.

Most of the balance cast is utterly wasted, drowning under the deluge of clichés — and that includes talented actors such as Atul Kulkarni (in his zillionth crooked cop role) and Vikram Gokhale (as a polished father figure).

Sameksha Singh as the hero’s lover flits in and out of the screen, serving the standard hackneyed cocktail of mush, melodrama and oomph. Abhimanyu Singh probably sleepwalks through these villainous ham trips by now.

“Pranaam” never had anything new to offer. At least it could have tried narrating its old tale with new context. (IANS)