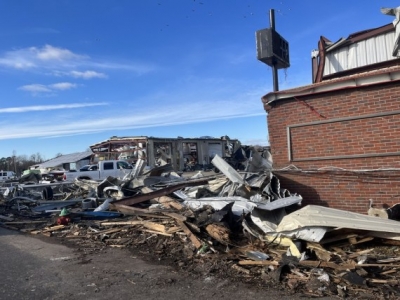 New York–Powerful storms like the ones that tore through parts of the central US this weekend are the “new normal” in an era of climate change, and the severity, duration and magnitude of the storms this late in the year were “unprecedented,” Deanne Criswell, administrator of the US Federal Emergency Management Agency (FEMA), told CNN.

“This is going to be our new normal,” said Criswell.

“The effects we are seeing of climate change are the crisis of our generation … We’re taking a lot of efforts at FEMA to work with communities to help reduce the impacts that we’re seeing from these severe weather events and help to develop systemwide projects that can help protect communities.”

Meanwhile, CNN said in its report that “scientific research on the role that climate change is playing in the formation and intensity of tornadoes is not as robust as for other types of extreme weather like droughts, floods and even hurricanes. The short and small scale of tornadoes, along with an extremely spotty and unreliable historical record for them, makes assessing their relationships to long-term, human-caused climate change very difficult.”

Though establishing connections between climate change and tornadoes is difficult, the correlation between El Nino or La Nina and tornadoes is strong — La Nina seasons tend to have increased tornado activity in the US, and it is worth noting that this country is currently experiencing La Nina, which is expected to last into spring of 2022, it added.

“The vicious centerpiece (of the weekend tornadoes) was a monster supercell that carved an hours-long, 250-mile path from eastern Arkansas to western Kentucky … A powerful storm system set up the chaos as it swept from the Rockies toward Canada, triggering high winds over large areas of the Mid-South, Midwest and Great Lakes,” reported The Washington Post (WP).

On Sunday, rescuers in the middle of the US resumed search operations for victims of a deadly tornado outbreak that left dozens of people dead and flattened entire communities when it tore through six states late Friday, including Arkansas, Illinois, Kentucky, Mississippi, Missouri and Tennessee, Xinhua news agency reported.

US Homeland Security Secretary, Alejandro Mayorkas said that he is heading to Kentucky on Sunday to meet with the governor and local officials and assess the damage caused by the storms.

“I am on my way to Kentucky with @FEMA_Deanne to meet with @GovAndyBeshear, state, and local officials,” he tweeted.

US President Joe Biden signed an emergency declaration for Kentucky on Saturday, opening the door for the FEMA and other federal entities to coordinate disaster relief efforts.

“Whatever is needed, the federal government is going to find a way to supply it,” Biden said on Saturday in Delaware.

Kentucky Governor Andy Beshear confirmed that the tornadoes that tore a 200-mile gash across his state and leveled homes and businesses left “devastation like none of us have ever seen before,” telling CBS’s “Face the Nation” on Sunday that “this tornado didn’t discriminate against anybody in its path, even if they were trying to be safe.”

Mayfield, Kentucky, was one of the hardest-hit communities, with satellite photos showing a swath of destruction, including at a candle factory that was completely flattened. More than 100 workers were in the factory when the tornado struck, and 40 of them had been rescued as of Saturday.

The official number of confirmed deaths from the tornadoes and severe storms stood at 25 Sunday morning, with Kentucky suffering the most deaths, but Beshear estimated the actual death toll in his state would exceed 80 and could rise to more than 100 as crews continue sifting through the wreckage.

According to WP, over 100 people are feared to have been killed after rare winter tornadoes ripped through parts of the South and the Midwest late Friday and early Saturday. Thousands of people woke up to power and water outages on Sunday, as rescue work goes on to determine the exact number of deaths. (IANS)