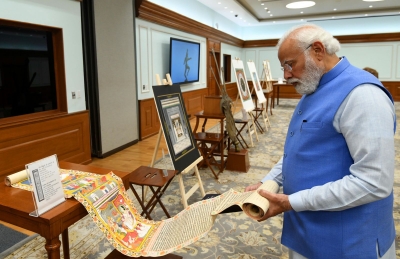 New Delhi– Prime Minister Narendra Modi on Monday inspected 29 antiquities which have been repatriated to India from Australia.

Sources said that the antiquities range in six broad categories as per themes – Shiva and his disciples, Worshipping Shakti, Lord Vishnu and his forms, Jain tradition, Portraits and decorative objects.

These antiquities come from different time periods, with earliest dating to 9-10 century CE. These are primarily sculptures and paintings executed in a variety of materials – sandstone, marble, bronze, brass, paper.

“In a historic move, 29 antiquities have been repatriated to India by Australia. Prime Minister Modi inspected these antiquities which returned from Australia today,” sources said. (IANS)