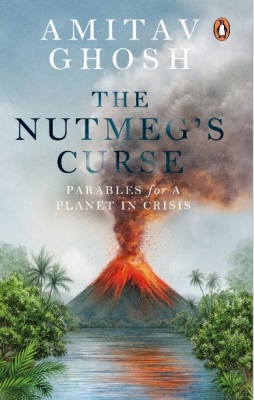 New Delhi– Before the 18th century, every single nutmeg in the world originated around a group of small volcanic islands east of Java, known as the Banda Islands. As the nutmeg made its way across the known world, it became immensely valuable – in 16th century Europe, just a handful could buy a house. It was not long before European traders became conquerors, and the indigenous Bandanese communities – and the islands themselves – would pay a high price for access to this precious commodity. Yet the bloody fate of the Banda Islands forewarns of a threat to our present day.

Amitav Ghosh argues that the nutmeg’s violent trajectory from its native islands is revealing of a wider colonial mindset which justifies the exploitation of human life and the natural environment, and which dominates geopolitics to this day.

Written against the backdrop of the pandemic and the Black Lives Matter protests, and interweaving discussions on everything from climate change, the migrant crisis, and the animist spirituality of indigenous communities around the world, “The Nutmeg’s Curse” offers a sharp critique of Western society, and reveals the profoundly remarkable ways in which human history is shaped by non-human forces.

“What do you do when the subject matter of life on this planet seems to lack . . . life? Your read ‘The Nutmeg’s Curse’, which eschews the leaden language of climate expertise in favour of the re-animating powers of mythology, etymology, and cosmology,” says Harvard University’s Naomi Oreskes, a professor of the History of Science.

“Ghosh challenges readers to reckon with war, empire, and genocide in order to fully grasp the world-devouring logics that underpin ecological collapse.

It’s widely recognized that the climate crisis is multi-dimensional, yet American cultural conversations about it are mostly stuck in its scientific, technological, and economic dimensions. In this tour de force, Amitav Ghosh defiantly moves the conversation into the realms of history, politics and culture, insisting that we will never resolve our planetary crisis until we acknowledge that the “great acceleration” of the past fifty years is part of a larger historical pattern of omnicide.

“For centuries, the dominant global powers have seen Earth — its plants, its animals, and its non-white peoples — as brute objects: mute, without agency, and available for the taking and killing. The solution to the climate crisis, Ghosh insists, is not injecting particles into the stratosphere to block the sun, or even to build a bevy of solar farms (as important as the latter is). Rather, the solution lies in re-engaging with the vital aspects of life, in all its capaciousness, and in doing so move past our long history of destruction and into true sustainability,” Oreskes adds.

Amitav Ghosh was born in Calcutta in 1956. He grew up in Bangladesh, Sri Lanka and India. He studied at the universities of Delhi and Oxford and published the first of eight novels, “The Circle of Reason”, in 1986. The first novel in his Ibis trilogy, “Sea of Poppies”, was shortlisted for the Man Booker Prize. He received the Jnanpith Award in 2018.(IANS)