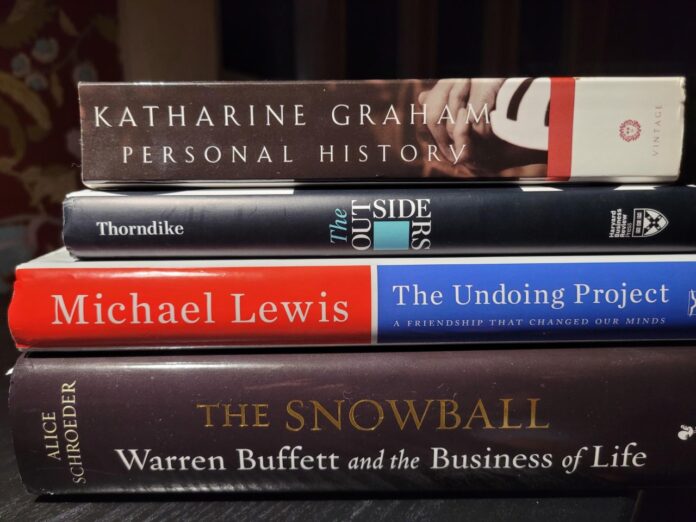 BOSTON—As usual this summer began with blooming flowers and vegetables in The Mishra Garden and my list of books to read. The first book on the list this year was: The Snowball: Warren Buffett and the Business of Life by Alice Schroeder (2008, Bantam Books-960 pages.) As I began reading The Snowball, a new book arrived at home anonymously sent: The Outsiders: Eight Unconventional CEOs and Their Radically Rational Blueprint for Success by William N. Thorndike, Jr. (2012, Harvard Business Review Press—250 pages.)

Generally, I read one book at a time, but this summer turned out to break almost every guidepost I had created for myself. I was not familiar with the names of many unconventional CEOs in the book, which included Tom Murphy of Capital Cities Broadcasting; Henry Singleton of Teledyne; Bill Anders of General Dynamics; John Malone of TCI; Katharine Graham of The Washington Post Company; Bill Stiritz of Ralston Purina; Dick Smith of General Cinemas; and Warren Buffett of Berkshire Hathaway.

I looked in my bookshelf and found Graham’s autobiography: Personal History by Katharine Graham (1998, Vintage Books—642 pages.) I pulled out that book. As I was hauling Personal History, my eyes fell on another book: The Undoing Project: A Friendship That Changed Our Minds by Michael Lewis (2017, W.W. Norton & Company-362 pages.) This book was also sent to me anonymously by a friend last year (I eventually found out who this dear friend is.) It’s a blessing to have a few good friends who know your interests, taste, and care about you.

Unfortunately, against my own conventional wisdom, I started reading all four books at the same time. It was a disaster; and I went back to my inner directive of doing only one thing at a time (Now, I am convinced that multitasking is the dullest idea ever invented or evolved.) I finished reading The Outsiders first because it was a short book and each chapter was about an exemplary CEO, and since three of them belonged to media and entertainment, I wanted to know more about them. Then I read and re-read The Undoing Project. This book truly changed my thinking and decision-making. This book is the story of two friends and psychologists—Daniel Kahneman and Amos Tversky. Of these two, Kahneman was awarded Nobel Prize in Economics in 2002 for his work on the psychology of judgment and decision-making.

Before I get into the Undoing Project, I loved some unconventional thinking of The Outsiders CEOS. Here are a few quotes:

“It is impossible to produce superior performance unless you do something different,” –John Templeton

“I change my mind when the facts change. What do you do?” –John Maynard Keynes.

“My only plan is to keep coming to work…I like to steer the boat each day rather than plan ahead way into the future,” –Henry Singleton.

“They have not repealed the laws of arithmetic,” John Malone.

“Despite her success, (Katharine) Graham was plagued by occasional bouts of self-doubt well into her nearly 30-year tenure as CEO. Fortunately, she was also strong willed, independent, and comfortable making controversial, unconventional decisions…” The Outsiders.

“You’re right not because others agree with you, but because your facts and reasoning are sound,” –Benjamin Graham.

Now, as I said earlier, The Undoing Project did change my mind in many ways. It made me realize the stark differences between emotional and rational decisions, and how often we make emotional decisions that contain many errors. How we justify our decisions, how we experience happiness with anticipation, when we experience it and when we remember it? How human mind works or fails to work when it is forming judgements and making decisions? Are we smart to know our own mind well enough to mistrust it? Should we look for the right answer or better answer?

What about all the biases that comfortably reside in our mind and make us err many of our decisions? “Human mind was just bad at seeing things it did not expect to see, and a bit too eager to see what it expected to see.” “Maybe the mind’s best trick of all was to lead its owner to a feeling of certainty about inherently uncertain things.”

How often we are impressed by charming personalities? But what the charm might mask: “addictions, personality disorders, injuries, a deep disinterest in hard work.” The book quotes Houston Rockets General Manager Daryl Morey as saying: “Your mind needs to be in a constant state of defense against all this crap that is trying to mislead you. We’re always trying to figure out what’s a trick and what’s real.”

What is the role of memory in human judgement? Can you observe what is happening in our own mind? Most importantly: Is your behavior driven not by thoughts and feelings but by external rewards, validations and punishments?

I found the simple questions raised in the book fascinating. For example: “How does the brain creates meaning? Hoe does it turn the fragments collected by the senses into a coherent picture of reality? Why does the picture s so often seem to be imposed by the mind upon the world around it, rather by the world upon the mind? How does a person’s understanding of what he sees changes with the context in which he sees it?”

The book emphatically disputes the fact long held by economists that people are smart and rational. Daniel Kahneman thought: “This is what happens when people become attached to a theory. They fit the evidence to the theory rather than the theory to the evidence. They cease to see what is right under their nose.”

The book also touches upon memory of experience of pain and pleasure. People seem to remember the last experience of enduring pain more than the happy times of bygone days. We often see this phenomenon in relationships. When relationship break ups are bitter, people forget all the great times they had together in the past and only remember the worst memories, pain, unhappiness and bitterness. “Last impressions can be lasting impressions,” said Dr. Don Redelmeier in the book. So, forget about the first impression, and seriously think about the last but the lasting impression that is going to linger in the mind for the rest of the life.