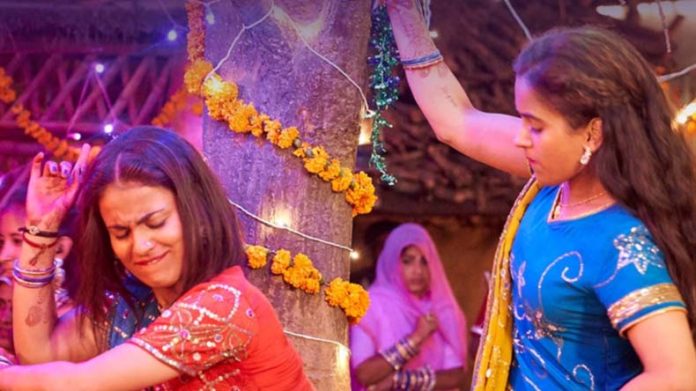 Based on Charan Singh Pathik’s short story titled, “Do Behnein”, Pataakha is a tale of two feral, warring sisters, who love each other with a fierceness that stands beside their lifelong rivalry.

Set in Rajasthan and designed as a psychological comedy, the film has a rustic charm that entices the audience and one that you can relate to.

The narrative begins with snap-shots of the rivalry between Champa Kumari aka Badki and Genda Kumari aka Chhutki, the two daughters of Shanti Bushan (Vijay Raaz) a quarry contractor. The two of them are as different as chalk from cheese, with Badki desiring to be a dairy farmer and Chhutki dreaming of becoming a teacher one day and, both always swearing never to live together, ever.

But due to unavoidable circumstances, the sisters are forced to elope with their respective lovers; Badki with a timid engineer (Namit Das) and Chhutki with an English speaking army man (Abhishek Duhan). How the two sisters land up living together becomes an interesting twist in the tale.

And, when the two aren’t fighting, their rivalry is fuelled by a Naarad-like character called Dipper (Sunil Grover), who also happens to be the narrator of the tale.

With the hysterical squabble that leads to crass-wrestling, the first act entertains and keeps you intrigued. But gradually as life complexes the roaring pot-shots along with the physical clash, the tone gets monotonous and the sheen fades away.

But what keeps you glued are the brilliant performances by the not-so-famous cast. Sanya Malhotra as Chhutki, the younger sister, along with Radhika Madan as Badki, the older one, are both fabulous. They live under the skin of their characters, moving freely with gay abandon and mouthing dialogues with a tinge of the local dialect which are earthy and far from bucolic. The lines, brought to life by the demeanour of the sisters, offer light moments to chuckle.

Vijay Raaz as Shanti Bushan, who loves his daughters dearly, excels as the world-weary and fatigued father of the duo. Sunil Grover as Dipper is an extension of his television persona.

Saanand Verma who essays the role of Patel, the groom abandoned at the mandap, along with Abhishek Duhan and Namit Das, have their moments of on-screen glory.

While on the face of it, the film appears to be a simple tale of reality and dreams, Director Vishal Bharadwaj uses the two sisters blatantly as a metaphor to pass on a socio-political message. The scenes of the warring sisters with no one trying to separate them just add a poetic flavour to the tale.

While the film has all the trappings of a Vishal Bharadwaj film, Ranjan Palit’s camera work is worth a mention. His weird camera angles and movements bring out the eccentricities of the sisters and make the drama more vibrant.

The loud background score and the music mesh seamlessly with the narrative. Those looking forward to Malaika Arora’s item number would be disappointed.

Overall, the film is an above average entertainer. (IANS)