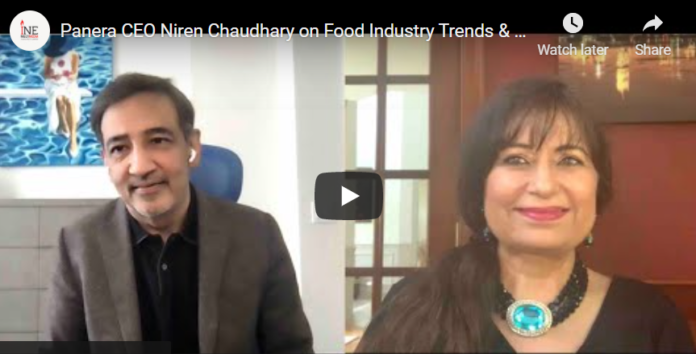 BOSTON—When it comes to food retail industry, Panera CEO Niren Chaudhary has established himself as an undisputed leader of corporate leadership on a global scale.

With an impressive track record of establishing brands and leading companies around the world, Mr. Chaudhary joined St. Louis-based Panera Bread as CEO in May 2019. Since then, he has led the company with a passion.

In an exclusive video interview on Chai With Manju, Mr. Chaudhary talks about changes at Panera, its successes during the pandemic, and how to make global brands succeed in India.

To watch the full interview, please click here or on the image blow.

In addition to talking about his recipe for success, Mr. Chaudhary touches upon his daughter’s story who passed away at an early age of 19 and how she influenced his journey as a person and as a professional, working with Priyanka and Farhan in the Bollywood film Sky is Pink, and more: how to make your dreams a reality—the secret ingredient.

Mr. Chaudhary joined Panera from Krispy Kreme Doughnuts, Inc., where he served as Chief Operating Officer and President of the International Division. Prior to that, he spent 23 years at Yum! Brands in a number of positions, including serving as President of Yum! India, and most recently in the role of President of KFC Global, where he was responsible for 5,000 stores in 50 countries with $5 billion in revenue.

He holds a bachelor’s degree in Economics from St. Stephen’s College in Delhi, an MBA in marketing from the University of Delhi, and also completed the Advanced Management Program at Harvard Business School.