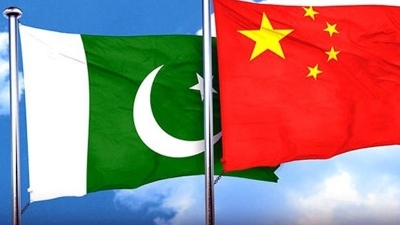 New Delhi– Pakistans decision to form a complete strategic alliance with China may invite the “wrath of the US and its allies”, the countrys policymakers anticipated during their last weeks closed-door briefing to the lawmakers on national security issues, The Express Tribune reported.

The members of the Pakistan Parliament were told that the country was manoeuvring to maintain a “balance” in ties with the US and China.

However, Pakistan’s efforts to seek that balance seem to have not produced the desired results, the report said.

The lawmakers were informed that the country’s relationship with the US, Pakistan’s traditional ally, is confronted with further perils in the wake of recent developments, particularly the chaotic exit of the US from Afghanistan, the report said.

“The ties with the US at the moment are at the lowest ebb,” an MP quoted a senior figure as saying.

Pakistan’s longstanding ties with China have in the past helped Islamabad to act as a bridge between Washington and Beijing, acquiring a somewhat win-win situation. But finding itself in an altered geostrategic setup, Pakistan no longer views it as an easy task, the report said.

As China inches closer to matching the US on all fronts, there have been visible signs of what observers see as a ‘new cold war’. Against this backdrop, Pakistan is confronted with the daunting task of sustaining a balance in its alliances.

On one hand, Beijing has stood by Islamabad in difficult times and has emerged as a major investor but on the other, Islamabad also has to take into account Washington’s huge leverage over international financial and other institutions, the report said.

Briefing the lawmakers, the policymakers highlighted that while China has been Pakistan’s long-standing “friend and ally”, the US still holds the key in terms of IMF and FATF. Therefore, Pakistan is striving for maintaining a balance.

According to the Pakistani assessment, the US could tighten the screws on Pakistan through the International Monetary Fund (IMF), Financial Action Task Force (FATF) and other means, the report said.

The prospects of any positive development on the Pakistan-US ties are grim. “Sanctions, least likely, coercion through IMF and FATF highly likely,” according to the assessment of Pakistani policymakers.

The US could also resort to putting curbs on Pakistani exports, it was feared.

The report said Pakistan is already struggling to revive the $6 billion bailout program because of the stringent conditions the global lender wants the country to first fulfil. Similarly, despite the substantive program on the action plan, the FATF has kept Pakistan on the “grey list.”

The policymakers fear that the US Congress could move new legislations penalizing Pakistan for its role in Afghanistan, the report added.

But the US’ priorities have visibly undergone a shift following its withdrawal from Afghanistan and is once again looking to abandon Pakistan.

Last month, when US Deputy Secretary of State Wendy Sherman visited both Pakistan and India she had said Washington had “no interest” in going back to the days hyphenating India and Pakistan, and that her trip to Islamabad is only for “specific and narrow purpose”.

Sherman, who was speaking at an event in Mumbai during the last day of her two-day visit to India, also said her Pakistan visit was for a “particular set of reasons” and is not meant to once again rebuild a broader relationship with the country.

A western diplomat while speaking on condition of anonymity said some of the statements made by Prime Minister Imran Khan after the US exit from Afghanistan did not help Pakistan’s cause. It sent the wrong message to the US. There was no need to “putting salt on the wounds,” remarked the diplomat, the report added. (IANS)