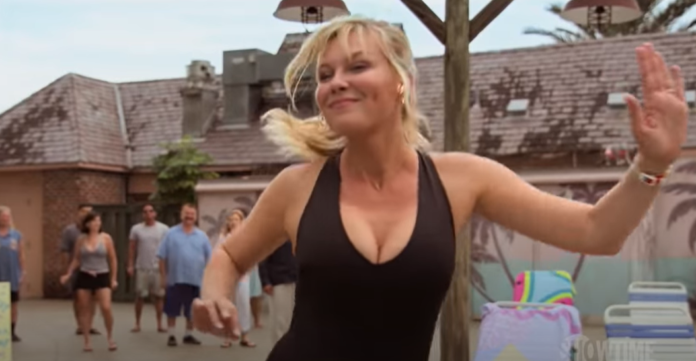 Few works of fiction have had such resonating impact as Arthur Miller’s 1949 play “Death Of A Salesman” when it comes to shredding the American Dream, though Hollywood does impress once in a while dealing with the subject. You could recall “The Big Lebowski” at random, or “Fear And Loathing In Las Vegas and “Easy Rider”, too.

Robert Funke and Matt Lutsky’s oddly titled but amazingly executed “On Becoming A God In Central Florida” utilises its structure of a web series and spreads the idea over 10 episodes. By turns dark, comic, shocking and brutal, the show remains absolutely absorbing as slowburn storytelling settles in.

The year is 1992 and at the core of the tale is Krystal Stubbs (Kirsten Dunst). She lives with her husband Travis (Alexander Skarsgard) and their infant daughter on the outskirts of Orlando, Florida and works at a local water park.

Travis, a recovered alcoholic, has done admirably to spring back in life, almost rising to the top at Founders American Merchandise (FAM), a multi-level marketing company touting a get-rich pyramid scheme to lay persons, luring them with the dream that everyone in the United States, the land of opportunities, is a potential millionaire.

The narrative cuts to the chase early one — in the very first episode itself — as an irreversible tragedy shatters Krystal’s picture of contentment forever. Quite reluctantly, she must join ranks at FAM.

That is also where the screenplay sets up scope for Krystal to discover the murk beneath the dazzle at FAM, and its dynamic owner Obie Garbeau II (Ted Levine), who habitually also cuts cassettes of motivational speeches to woo the masses when he is not selling promises of utopia.

The series does well to base its American Dream theme in the nineties, when the concept of multi-level marketing (MLM) really caught on all over, thanks to a rapidly burgeoning television culture. At the same time this was the era when consumerism was opening up economies the word over. People were reacting to the need to be rich more than ever before, as opposed to being comfortably sufficient in life.

The idea could have led to an intense, brooding screenplay. Instead, Funke and Lutsky surprise us with the way they imaginatively fuse humour into the saga. It is interesting to note how the grimmest of situations are rendered with irreverence, and yet the gravity of the situation is not lost out owing to such quirky treatment.

The series is adequate in its styling of the nineties, down to the way the characters that revel in peculiarities of the era. Kirsten Dunst is credited as an executive producer, and she sure has accorded herself a dream role. Krystal is the life of the show. Present almost in every frame once the story really gets going, every twist in the tale lets Dunst explode with a different nuance.

Theodore Pellerin as Cody, a key player at FAM and someone whose life will inevitably get tangled with Krystal’s, makes for an interesting watch, blending a salesman’s suave with sensitive gullibility. The veteran Ted Levine, partly a crafty marketeer and partly faux motivational guru as Obie Garbeau II, cuts an impressive picture, too.

These, and every other character in the story, are stuck at various rungs of the ladder that defines opportunism. It is a fickle trail all the way up as one strives to be a God in this urban jungle, the show reminds you, and the scene is a particularly nasty mess in Central Florida. (IANS)