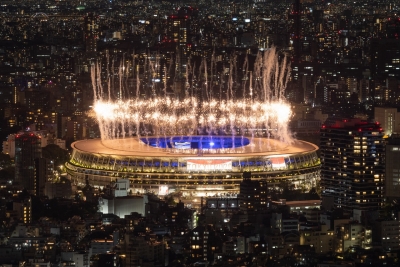 Tokyo–International Olympic Committee (IOC) president Thomas Bach declared the 32nd Olympic Games at Tokyo closed on Sunday as Japan gave the world one more glimpse of its culture and tradition.

But what shone through more clearly for the entire world was the resilience, humanity’s passion for sports, as well as friendship and unity among the Games participants. And it proved that the human spirit can prevail — even over a pandemic.

When the world is still battling the Covid-19 pandemic, over 11,500 competitors and over 60,000 volunteers, officials, administrators, and media persons gathered in one city for the biggest sporting carnival in the world.

And a carnival it was at the closing ceremony with song, dance, smiles, and laughter prevailing over the gloom and feeling of despair before the Games.

Wrestler Bajrang Punia, who won a bronze medal in men’s 65kg wrestling, carried the Indian flag as athletes from all contingents came into the main Olympic stadium to celebrate the Tokyo Olympics one last time.

Olympic athletes and billions of people watching the live broadcast got a surreal glimpse of everyday Tokyo life on Sunday as the closing ceremony of the Tokyo Olympic Games was briefly transformed into a park with grass, buskers, and BMX riders in a valediction.

Performers danced, skipped, and played football, mingled and waved to the athletes, who had gathered closely together on the grass.

The Organising Committee for the Tokyo Olympics said the scene was meant for athletes to “experience Tokyo” as they had spent all their time in Japan cooped up in rooms or competing in venues. The participants did not get a chance to experience daily life in Tokyo and therefore a glimpse of it was made available.

The Olympic flag was brought down and handed over to administrators from Paris, which will host the next edition of the Games in Paris.

A medal distribution ceremony was held during the closing ceremony for the marathon runners, with IOC president Thomas Bach presenting medals to Kenyans Peres Jepchirchir (women’s winner) and Eliud Kipchoge, gold medallist in the men’s section.

As fireworks lit the Tokyo skyline, inside the stadium Japanese musicians played traditional songs and the athletes, gathered in the main stadium, danced and hummed with them and all forgot the Covid-19 pandemic that is still raging. (IANS)