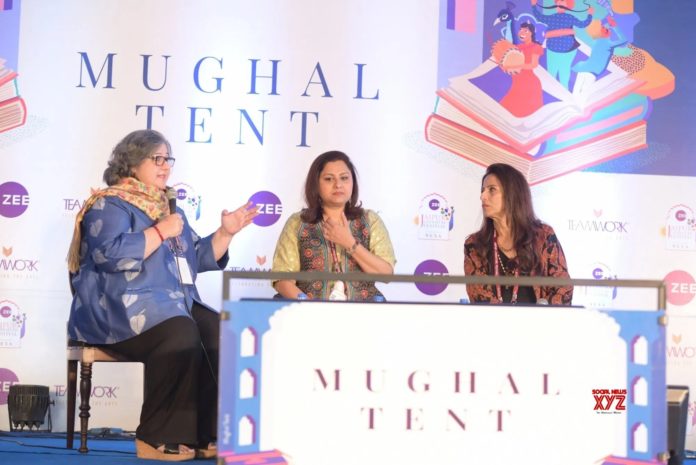 Jaipur– “For a working woman, the pressure is not just to balance home and work, but also ascertain a work-home-society balance. The book is under no circumstances self-help one. What it is supposed to do is kick you to get up,” said writer and journalist Kaveree Bamzai, during the session “No Regrets: The Guilt-Free Womans Guide to a Good Life,” which is also the title of her anthology published by HarperCollins India.

Sharing the stage with author Shobha De and actor and activist, Vani Tripathi Tikoo on the inaugural day of the Jaipur Literature Festival, the journalist stressed that a good life allowed one to be herself. “As women, we don’t need to be told what is right. It is one when women learn not to be silenced.”

Writer Shobha De added that the most important and visible change in the last decade has been the fact that women are no longer invisible.

“They have a mind, and not also. And yes, our job is to disturb the society, shake it to wake it up. It is important that we consistently fight – inside and outside the home. Just don’t apologise for who you are.” Adding that resisting was the only way forward, De added, “You can’t crawl in a corner and be defensive. Just don’t be cornered.”

Citing the example of older women leading protests, Bamzai said that the society had never paid attention to that demographic. “The 50 + age group of women have so much to offer. By that age they have already fulfilled most of their pre-defined roles.” Adding to this, De said that this age group had a tremendous zest for life and it is unfair to dismiss them as a spent force.”

Stating that it was important for women to accept themselves, Bamzai one must let go of certain things. “Where is the need to be perfect?”

Talking about the MeToo movement in India, De stressed that the men accused of harassment had got back their jobs whereas several people had started avoiding employing women at workplaces.

Vani Tripathi Tikoo added that the political space and film arena were quite judgemental when it comes to women. “However, young women nowadays don’t take things lying down and speak up, which is a very healthy development.” (IANS)