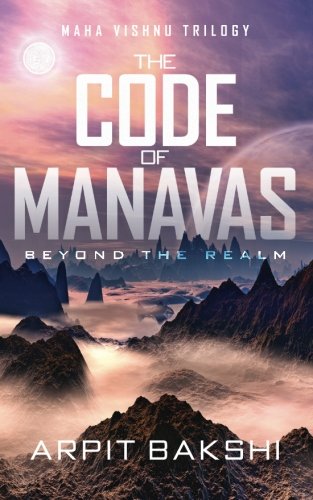 New Delhi– Enter the mythical world of Maha Vishnu and get swept up in a fast-paced and suspenseful narrative; flick through the second part of the “Blue Lotus Trilogy”, which pays homage to India’s magnificent mythological heritage and takes the reader on a journey into the heart of human passions; connect with some of the deeper concepts in the Gita; and get into the realm of the nothingness of profound and lasting peace.

The IANS bookshelf has stories from the world of mythology and spirituality to offer its readers this weekend.

1. Book: The Code of Manavas; Author: Arpit Bakshi; Publisher: Rupa; Price: Rs 295; Pages: 285
Book one of the Vishnu trilogy, “The Code of Manavas”, is set some two million years past AD 2050, when earth as we know it ceased to exist and so did mankind. A new race — the Manavas — now exists on the erstwhile Earth, which is divided into two cities — Madhavpur and Ayudhpur.

In the quiet and peaceful city of Madhavpur, a reclusive Krishna is busy with an immense task. He has to prepare a new abode for the Manavas before an impending apocalypse destroys them.

He knows something that nobody else does — the Manavas are running out of time faster than they can imagine and there are no inhabitable planets to escape to. To make matters worse, there is someone in Madhavpur who wants to destroy Krishna and subjugate each Manava.

The Manavas seem to be doomed. Yet, Krishna knows there is a slim chance of survival, although there is a huge price to be paid for it. Will the various factions of the Manavas unite for the greater good? Will Krishna, who saved them during the turn of the last Yuga, be able to save them now? What will be the price to pay?

2. Book: Sitanshu; Author: Anita Shirodkar; Publisher: The White Place; Price: Rs 349; Pages: 317
As the divine Blue Lotus Indivara sprouts an ominous red petal, its guardians must do everything in their power to protect it and their kingdom. Aryavir and Sitanshu march to the border of Kalipura for a bloody showdown with the Chandraketu King Divyendu. It seems as if the Kamal Akshi Army with its peerless long-haired Kesakuta warriors cannot lose a war, but the wily enemies of Kamalkund have diabolical plans that are not written in any rule book. Thanks to the evil machinations of the Mayakari Queen Tamasi and wily King Kratu, Aryavir and Sitanshu are facing the battle of their lives.

With hidden ancient secrets that are known only to the revered Maheshwari Masters, the mythological Old World is about to be plunged into intrigue and danger its denizens could never have imagined. Powerful kings face mortality, relationships are tested to their breaking point and the Great War of Sompur will bring completely unexpected repercussions.

Written with the classic Indian ethos, Sitanshu, the second part of the Guardians of the Blue Lotus Trilogy, pays homage to India’s magnificent mythological heritage and takes the reader on a journey into the heart of human passions.

3. Book: Gita; Author: Sonal Sachdev Patel and Jemma Wayne Kattan; Publisher: Harper Collins; Price: Rs 250; Pages: 99
When 11-year-old Dev’s father dies, he can’t stop lashing out at those he loves. Until he meets Sanjay, a sprite-like being who claims there is a battle raging inside Dev’s own body. Sanjay embarks on a perilous journey beginning in the darkest realm at the bottom of Dev’s spine.

As he searches for the noble warrior Prince Arjun, the only hope to defeat wicked Prince Ego, Sanjay encounters starving mobs, thieving gangs, water worlds and lands of fire, until at last he finds Arjun on the battlefield, ready to fight for Dev. This book takes the epic battle within the Gita and transports it inside the body of a young boy called Dev.

A classic story of good overcoming evil, through Dev and Sanjay’s adventure, readers will be able to connect with some of the deeper concepts in the Gita.

4. Book: Shunya; Author: Sri M; Publisher: Westland; Price: Rs 350; Pages: 225
He appears out of nowhere in a sleepy little neighbourhood in suburban Kerala. He calls himself Shunya, the zero. Who is he? A lunatic? A dark magician? A fraud? Or an avadhuta, an enlightened soul?

Saami — as they call him — settles into a small cottage in the backyard of the local toddy shop. Here he spins parables, blesses, curses, drinks endless glasses of black tea and lives in total freedom. On rare occasions, he plays soul-stirring melodies on his old, bamboo-reed flute.

Then, just as mysteriously as he arrived, Shunya vanishes, setting the path for a new avadhuta, a new era.

The novel is a meditation on the void which collapses the wall between reality and make-believe, the limited and the infinite. With its spare storytelling and profound wisdom, it leads us into the realm of “shunya”, the nothingness of profound and lasting peace, the beginning and end of all things. (IANS)