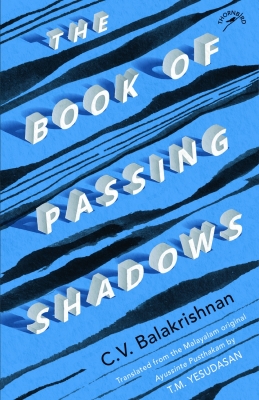 New Delhi– Set in a Malabar village of Christian settlers and rendered by the prolific pen of C.V. Balakrishnan, “The Book of Passing Shadows”, translated from the Malayalam original “Ayussinte Pusthakam”, is the melancholic story of a familys fall from grace and its journey to redemption.

As the narrative unravels against the wider inner conflict between bodily temptations and spiritual aspirations, the sins of one generation seem to visit ominously upon the next.

Through his journey from an innocent childhood to a ruined adolescence, Yohannan loses everyone he knows as ‘family’ — a father who is a convicted felon, a grieving mother who passes away while her husband is in prison, an elder sister with prospects who elopes to build a better life, a grandfather who embraces death after committing a sin, and a best friend and lover who chooses religion over a domestic life.

The only solace he finds is in the loving companionship of a grieving widow, Sara, who has been equally wronged by fate and unbundles her woes with him.

Faith plays a pivotal role, providing a mythical, ethical, and moral scaffolding of this heart-rending novel, which resonates with the agony and pathos of the human spirit caught in the travails of earthly life.

Written in a sublime style made lyrical with a biblical cadence and rich in scriptural allusions, this passionate and visionary narrative has remained popular with readers since it was first published in 1984.

The translator, T.M. Yesudasan, is a former Associate Professor and Head of the Department of English at the CMS College in Kottayam. He has contributed to journals and anthologies on literary and cultural studies, including the collection “No Alphabet in Sight: New Dalit Writing from South India”.

“The Book of Passing Shadows” is the latest addition to Niyogi Books’ repertoire of translated fiction. (IANS)