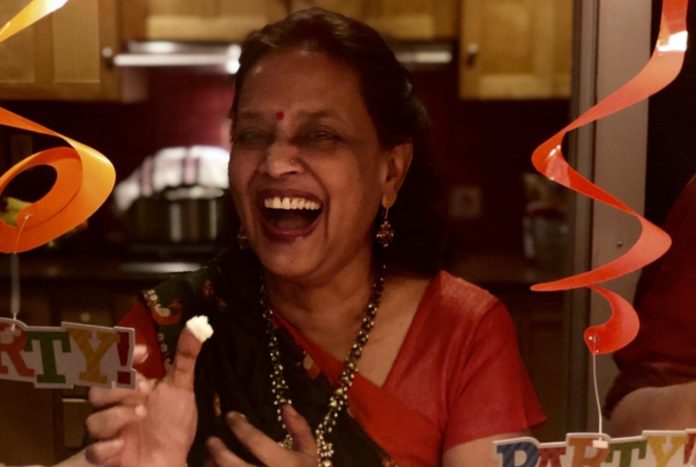 LEXINGTON, MA–Poonam Ahluwalia, 62, of Lexington,MA passed away in her home the early morning of October 21st 2019 with her family by her side after a beautiful journey on this Earth. She is survived by her husband Mohinder, her son Saatvik, her daughter Tara, her daughter-in-law Nanditha, and countless children in her various communities who she had a hand in raising.

Poonam was born in Jaipur, Rajasthan on February 14th, 1957 to Girish and Uma Mathur. She completed her BA in Political Science at Lady Sri Ram College in Delhi (1977) and a Master’s in Political Science at Rajasthan University in Jaipur (1979) and after her marriage to Mohinder in 1980, she moved with him to the U.S. in 1985 and completed a Master’s in Communications at Boston University (1988).

Poonam devoted her life to the task of poverty eradication. Her professional life was a vibrant and inspiring journey which led her to immerse herself in a number of projects dedicated to this goal. She was involved in The Hunger Project in 1984 through 1997 and co-founded a project under their organization called Confronting the Subjugation of Women, a Critical Step in Ending Hunger, then she worked diligently for the Education Development Center (EDC) from 1997 to 2008, until going forward to found her own nonprofit organization, Youth Entrepreneurship and Sustainability (YES) in 2008. Over the course of her decade campaign, she hosted 5 global summits to address the issue of youth unemployment, putting it on the UN Global Agenda. In 2011, she went on to develop a new program called YouthTrade, a certification for youth-owned and ethically sourced products, getting them onto the shelves of premium retailers.

Many people know Poonam through the work she was doing out in the world. To her immediate communities in Boston, she was known foremost as a mother. She was a mother to all of Saatvik and Tara’s friends. She was a mother to the youth she inspired in her work. She was a mother to anyone who needed one. She kept the backdoor unlocked and provided a home for anyone, always reminding people that her home was their sanctuary, and following through on these words. Poonam had the incredible ability to see people as they were, in a whole picture, and love them thoroughly. She knew the entirety of a person’s heart from the briefest interactions, and she loved them.

She loved to hear stories about other people’s lives, to share stories of her own, and to experience life in all its vibrancy with those around her. Her most extraordinary trait was her ability to provide comfort. There was no darkness which she could not transform into light. For this reason, she was the beloved keeper of secrets for many. She was willing to share in the burden of other people’s grief, to wash away their shame, and to send them out into the world again replenished with a strong sense of self. Many people in her life relied on her to reorient them in moments of confusion and despair, and it was with nothing short of maternal magic that she did so.

Poonam was a prominent feminist role model for the women and girls she knew, and had no patience for the customs which kept women oppressed. Her struggle against oppression in all its forms was most visible in her professional life, but behind the scenes in her personal relationships she worked hard to empower each and every young woman she met. Many young women were inspired by her to continue the legacy of women’s resistance, whether in their everyday interpersonal relationships or out in the broader struggle for liberation.

Poonam touched the lives of countless people, far and wide. She was a force of love in this world. The news of her passing sent a ripple of grief through a number of communities, both locally and globally. A very special woman, she is beloved by all who knew her, and by all who knew of her. Her legacy is of collaboration, friendship, love, strength, and resistance. Her legacy is a gift to all.

Poonam was cremated peacefully in a private service at Mt. Auburn Cemetery on October 23, 2019. We joyously send her off to her next journey.