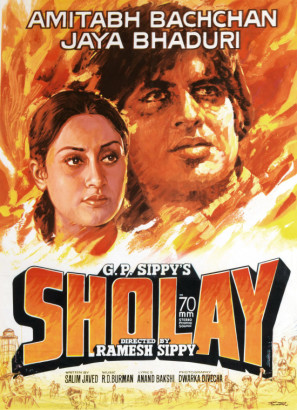 New Delhi–Veteran filmmaker Ramesh Sippy, who directed the 1975 Bollywood classic “Sholay”, says that he did not have enough money to finance the film at that time and had to depend on his father late G.P. Sippy for it.

“While making ‘Sholay’, I was very lucky to have my father back me,” Sippy said here on Tuesday at the fifth edition of “CII Big Picture Summit 2016”.

“I remember, when Dilip Kumar took Rs 1 lakh for doing a film, at that time everybody said that the industry would close down.

“At the time of ‘Sholay’, I didn’t have a budget. I had something in my mind which I shared with my father. The last film he did was ‘Seeta Aur Geeta’, which cost him Rs 40 lakh. It turned out to be a hit. I said to him that I want a crore to make a film and ended up with Rs 3 crore,” he added.

Ramesh said that a lot of people doubted that “Sholay” would do well on the box office.

“The actual cost of the star cast in the film was Rs 20 lakh, as compared to those Rs 3 crore. People even doubted our sanity at that time.

“Today if you make a film of Rs 150 crore, out of that Rs 100 is gone to actors. There is something lopsided about the movie-making business today,” he said.

“Sholay”, starring Sanjeev Kumar, Amitabh Bachchan, Dharmendra, Hema Malini and Jaya Bachchan in the lead, was a massive box office success and is considered as a cult classic in Indian cinema.

The session was aimed at discussing monetisation and valuation of Indian films.

While Shekhar Kapur, who was moderating the session, pointed out that China is increasing its number of screens faster than India, Ramesh said: “There is a huge government support in China. The private sector is also there, and the government backs those private companies in building theatres. We don’t have that kind of a system in India.”

He added that more than Hollywood films, Indian regional films are giving a competition to Bollywood in India.

“It’s not just the Hollywood films, a lot of regional films are also doing great business today. There are very good films coming out of various regional film industries. ‘Sairat’ has done a business of Rs 100 crore in Maharashtra alone. Similar things are happening in other states as well,” he said. (IANS)