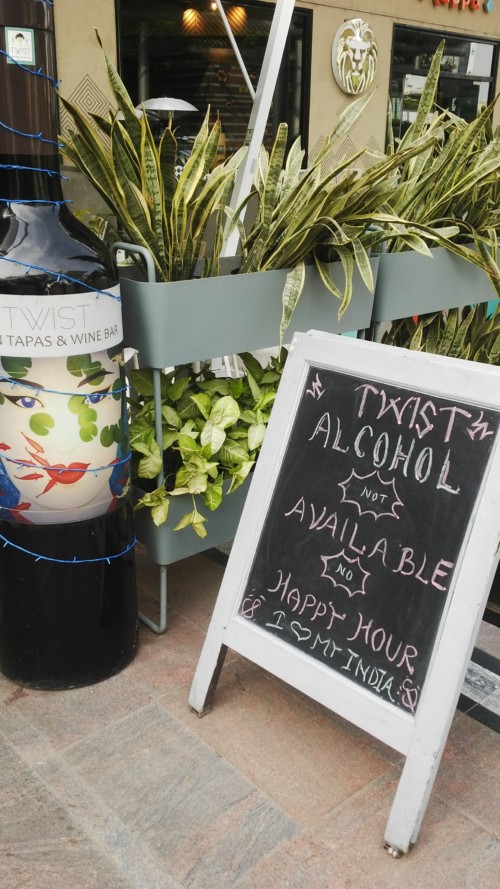 New Delhi– “Alcohol not available, No happy hour, I love my India” – reads a board outside a restaurant at Gurgaon’s CyberHub, as several areas including Delhi’s Aerocity, went dry after the Supreme Court’s directive to ban liquor sale 500 meters from highways.

While the restaurant owners and managers say they will respect the apex court ruling, hundreds of workers are scared as they foresee their jobs slipping away.

“This obviously means loss and a bad business… But we hope things would get better and we continue to rely on the great food that we serve,” Simran, owner of a six-month-old restaurant named Twist at Gurgaon’s CyberHub that discontinued serving liquor, told IANS.

Many other restaurants like The Wine Company, Hard Rock Cafe and Holy Smoke and 15 others have discontinued serving liquor from Saturday onwards.

“We hope that the ruling changes as many here are scared of staff cut,” said a waiter at one of the restaurants.

The Supreme Court on Friday said hotels and restaurants falling within 500 metres on either side of the national and state highways cannot serve liquor. The decision came in a move against drunken driving.

“It’s obviously about the bread and butter of many… We are still optimistic and are waiting for at least a week to see what could be done next,” a staffer at The Wine Company told IANS on condition of anonymity.

Some other restaurant owners feared losing business as most of their business was dependent on alcohol and not just food.

Several major hotels in Aerocity and Gurgaon had stopped the sale of liquor.

“We are not serving alcohol till further notice,” said a staffer at JW Marriott Hotel, Aerocity.

Radisson at Bilaspur, Crowne Plaza, Hyatt Regency, The Oberoi, The Leela Kempinski among others have stopped serving alcohol in Gurgaon since the order.

However, some including Vivanta by Taj, Hilton Garden Inn Gurgaon Baani Square, Park Plaza, Citrus hotel and Lemon Tree continued serving alcohol as they are beyond 500 meters from the National Highway.

On the question of clarification that the judgment applied only to liquor shops and not to hotels and restaurants, the apex court said no such relaxation could be made as that would defeat the object of preventing drunken driving.

The decision has however annoyed some revellers who doubt if the order would actually serve the purpose.

“One who has to drink would get liquor from anywhere… Government should rather make strict norms against drunken driving,” said Vikas Pandey, who works in a private company in Gurgaon and was at CyberHub for an evening out.

According to the Community Against Drunken Driving (CADD), every year 90,000 people die due to drunken driving.

“There are 1.5 lakh annual deaths due to accidents on Indian roads of which more than 70 per cent are due to drunken driving… among the dead, 45 per cent are youth,” Prince Singhal from CADD told IANS. (IANS)