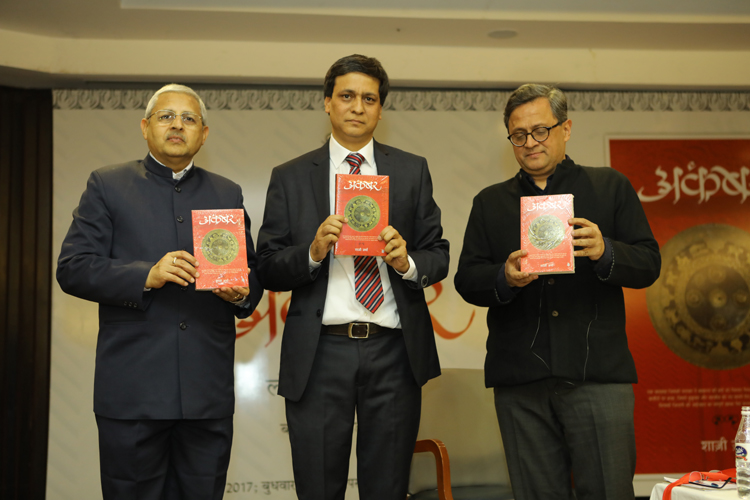 New Delhi–Emperor Akbar is among the most fascinating of the Mughal rulers and the latest addition to the scholarly offerings on him throws more light on his decisions as well as the frame of mind in which he made them.

Written by Shazi Zaman and published by Rajkamal Prakashan in Hindi, “Akbar” (pp342/Rs 350) is a close examination into possibly every material available on the celebrated emperor till date. Renowned historian Mukul Kesavan was in conversation with the author at the launch of the book on Wednesday evening.

The book is a result of two decades of “unparalleled research” by Zaman on the life of the emperor. Speaking on the occasion, he said, “I am overwhelmed by the response ‘Akbar’ has evoked. Obviously it is testimony to the fact that the emperor is very much alive in the collective memory of the people of Hindustan. The tale of Akbar’s inner and outer battles has never lost relevance.”

The book also draws from some of the exemplary work on Akbar such as Akbarnama Muntakhab-ut-Tawarikh, Baburnama, Humanyunnama and Tazkirat-ul-waqiat.

“We did a lot of meetings in the past 6 months and discussed every doubt in length to make sure no point was left untouched. We moved forward only when both of us agreed on all points. I must say I am extremely moved by the effort Shazi Zaman has put in for Akbar. As far as I remember the only such well researched novel in Hindi till date is by Rahul Sankrityayan. After a long time Hindi literature is going to have something of this sort”, said Satyanand Nirupam, Editorial Director of Rajkamal Prakashan.

The evening also witnessed Maand singing by Abid Ali Khan. He sang ‘jalla’, a composition sung in Rajasthani weddings. The song also finds a relevant mention in the book.

It is generally seen that a book is translated into other languages after gaining popularity but the English rights of the book have already been taken by Speaking Tiger from Rajkamal Prakashan, it was revealed. (IANS)