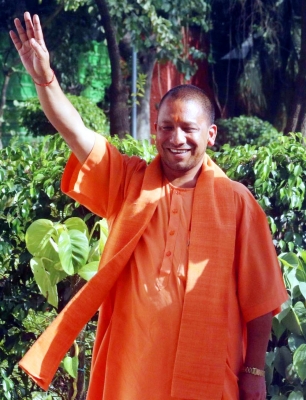 Lucknow–At a time when the communal cauldron is boiling over, this news brings a smile to the face.

Yameen Siddiqui, a 23-year-old Muslim youth, has got an image of Uttar Pradesh Chief Minister Yogi Adityanath tattooed on his chest.

He says that Yogi is his role model and he has given himself a gift on Yogi’s birthday, earlier this month, by getting the tattoo.

Siddiqui lives in a village on the border of Farrukhabad and Mainpuri districts and owns a footwear business here.

He admits that he has been facing a lot of flak from his friends and relatives since he got the tattoo but he is not upset.

“My wish is to meet Yogi Adityanath and show him the tattoo. I have great love and respect for him. He has changed Uttar Pradesh ever since he came to power. There is no discrimination and Hindus and Muslims are getting benefits of all welfare schemes,” Siddiqui says.

He refuses to talk about controversial issues like Gyanvapi mosque and the Mathura Eidgah. “That is for the court to decide.” (IANS)