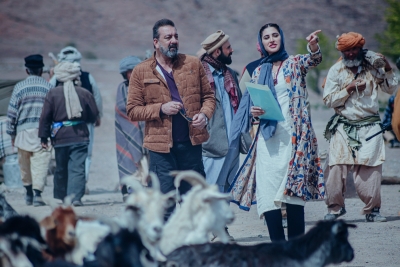 Torbaaz talks of war and terror, and the toll such things may take on children. The film fuses the idea with the power of sports — in this case, cricket — to unite and heal. Over the past two decades or so, these themes have often scored big for Bollywood. Yet, Torbaaz struggles to hold attention.

It could be because the film comes two decades too late. And it doesn’t help that the effort is sloppy in creation and execution. In a crowded OTT home page where the problem of plenty leaves you spoilt for choice, Torbaaz comes across as a product with no USP.

Director Girish Malik and co-writer Bharti Jakhar were obviously out to set up a Sanjay Dutt showcase. The actor plays Nasser Khan, a military doctor with a tragic back story. His wife and child were killed in a suicide bombing in Afghanistan. Back in the war-torn nation after a hiatus, Nasser, on seeing that the terror and violence continues unabated, decides to make a difference. In a country where innocent young boys are often forcibly taken away to join terror outfits, he decides to instil a sense of joy, purpose and hope. He inspires refugee boys to take up cricket.

Torbaaz tried to do too many things. The film tries to be a statement about the trauma of war and its impact of people, particularly children. It tries to regale as a sporting drama, dedicating nearly the last half an hour to a cricket match that clearly looks too uninspiring because you go in knowing how it would end. The film also tries to be a complete package to let Sanjay Dutt return with bang.

On the first count, the writing is too shallow. On the second count, watch a rerun of Lagaan once again, if you are really dying to catch some good cricket action on the fiction screen. And on Sanjay Dutt, although the narrative is entirely woven around him, the storytelling is too dull to let him leave an impact.

Dutt apart, most characters suffer from unidimensional imagination. Rahul Dev’s terrorist act appears a rehash of similar acts he has rendered in the past. Almost every other actor struggles to make insipid characters look interesting.

The film is brilliantly photographed (Hiroo Keswani), capturing the gorgeous Afghan landscapes with as much confidence as the odd gritty sequence of explosion. Editing (Dilip Deo) could have revealed tighter precision in a film that never really overcomes its sloppy pace. By the time it all ends, you are too bored to care if Dutt as Nasser manages to succeed in his mission.

Torbaaz aims at being a tribute to Afghan cricketers who triumphed against all odds to shine in the international arena of the sport. For their sake, the film ought to have been a more engaging effort.