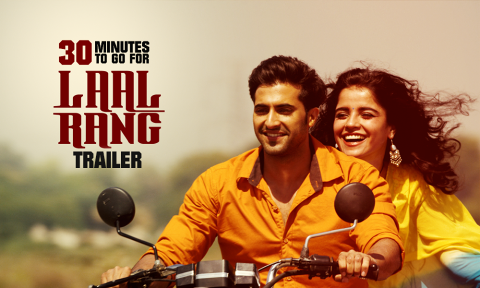 “Laal Rang”, a bromance based on true events that took place between 2002 and 2007, is a fascinating expose that highlights the illicit blood trade prevalent in some parts of India.

Narrated in a non-linear fashion, the film is the tale of bonding between Shankar (Randeep Hooda), a tout who manages the illegal blood trade in Karnal, Haryana, and his “chela” (protégé) Rajesh (Akshay Oberoi). How they meet and forge a bond, forms the crux of the tale.

Written and directed by Syed Ahmed Fazal, this story skilfully intertwines fate with reality and blends the right amount of humour, drama and seriousness in an otherwise drab subject. The Haryanvi dialect adds to the rustic aura of the setting. The dialogues are colloquial, witty and arresting, and the characters with all their quirkiness are well-etched and presented.

In an otherwise well-rounded story, the audience is left wondering about Shankar’s family, which is nowhere mentioned in the film.

The romance between Shankar and his childhood sweetheart Rashi and of Rajesh with his classmate Poonam Sharma is well-crafted as sub-plots that add humane shades to their characters.

The film belongs to Randeep Hooda. He portrays the role of Shankar with sincerity, bringing out the finer nuances of his character to the fore. With a swagger in his gait, a wheel on his hip belt which he swirls at dramatic moments and riding a RX 100 Yamaha, he slips into the complex role of the heartless professional and a soft-hearted romanticist with flamboyance and guiltless ease.

He is aptly supported by Akshay Oberoi who essays the role of Rajesh. With a twinkle in his eyes, Akshay showcases his admiration for Shankar, enthusiasm and greed, effortlessly.

Pia Bajpai as Poonam Sharma is buffoonish initially, but as the narration progresses, she holds her mettle with confidence. She effectively plays the bubbly small town girl, who wants to impress by speaking in broken, “Rapidex” English.

Meenakshi Dixit as Rashi, Shankar’s star-crossed love interest, Shreya Narayan as Neelam and the characters playing “Shani Baba”, the fake godman, along with Suraj aka Draculla in miniscule roles leave their indelible mark in the narration. Rajneesh Duggal as Superintendent of Police Gajraj Singh is perfunctory and the rest of the cast is simply natural in their performances.

For an indie film, with moderate production values, “Laal Rang” is impressive. The sound by Shahaab Alam is note-worthy. Visually, the settings and the frames are realistic. With his top angle, wide lens shots, director of photography Dhirendra Shukla’s cinematography captures Karnal in all its elements.

The heavy instrumental background score by Mathais Duplessy, Vipin Patwa and Shiraz Uppal, along with the songs “Mera mann” and “Aye khuda” integrate smoothly with the narration which is layered seamlessly by editor Shounok Ghosh.

Overall, “Laal Rang” is worth a watch for a well encapsulated story. (IANS)