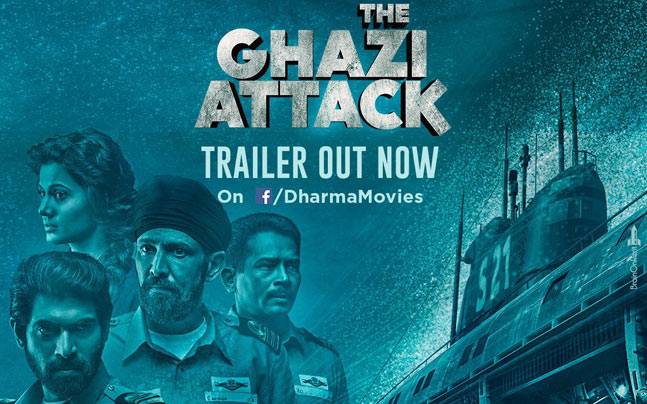 Purportedly an underwater war film set in 1971, “The Ghazi Attack” is the story of the triumph of India’s submarine S-21 over Pakistan’s PNS Ghazi, a submarine set out to destroy INS Vikrant.

On the face of it an interesting premise, it could have been an engaging film, replete with drama, action and patriotic fervour. Instead, it is a forced attempt at including all these ingredients in a mediocre fare that makes for tedious viewing sans any entertainment quotient.

Captain Ranvijay Singh (Kay Kay Menon), a hot-headed and nationalistic commander, spearheads the submarine S-21 along with a specially appointed officer named Arjun (Rana Daggubati) and second officer, the loyal and subservient Devaraj (Atul Kulkarni), when it sets out on a mission to combat Pakistan’s PNS Ghazi led by a clever commander Razaak Khan (Rahul Singh).

The two-hour film is set in the interiors of the submarine and the manner in which the trio fight obstacles, overcome differences and lead India to victory forms the crux of this tale.

The deliberate inclusion of action, melodrama and even patriotism, appears cliched. It reeks of a poorly written script and screenplay. At no instance is the film thrilling or even remotely intriguing. The entire narrative drags at an even keel, with no emotional chord that tugs at your heart as the viewer feels distanced from the unreal characters.

The poorly etched characters appear one-dimensional and paper-thin. They are hopelessly devoid of reality and in fact make serious crisis-like situations seem comic.

This film is a feeble attempt by director Sankalp Reddy in making an underwater war thriller, with patriotism thrown in for good measure. Although a subject that had potential, this one falls short of expectations. His direction appears to be as amateur as the writing. Even the performances by competent actors cannot salvage the film.

On the performance front, Rana Daggubati is strictly mediocre, but the fault lies with the poor script and not his abilities. He delivers what is expected of him, although unconvincingly. Kay Kay Menon is equally a victim of a badly crafted character and appears lopsided. Add to that is his forced Punjabi accent which is jarring and inadvertently elicits a chuckle.

Atul Kulkarni is sincere and by far the most realistic, both in terms of the character as well as portrayal. Taapsee Pannu is wasted, and so is the late veteran actor Om Puri.

The cinematography deserves a mention and although unabashedly meshed with computer generated images, it succeeds in making an impact. Perhaps the only area where the film scores is in the technical department.

Predictable from word go, “The Ghazi Attack” fails to engage, thrill or even evoke a sense of patriotism. (IANS)