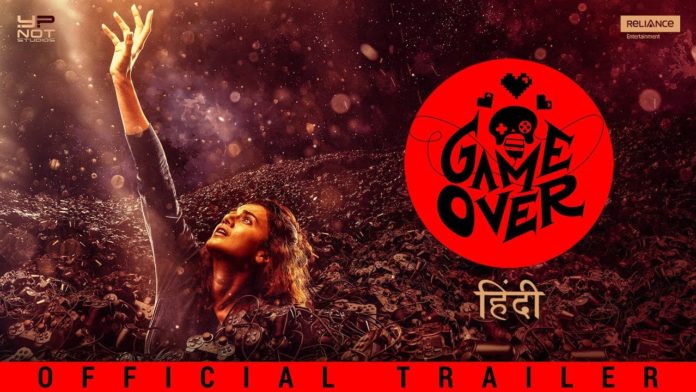 With all the trappings of its genre tropes, the film “Game Over” starts with a promise. But to accept the film as a psychological thriller or a horror thriller, one needs to reject the false premise it is based on.

Living in a palatial bungalow with only a maid and watchman in tow, in the dubious locality of Gurugram, where psychopaths behead single girls, burn their torsos and play football with the decapitated heads wrapped in plastic, Sapna (Tapsee Pannu) — a victim of a rape fantasy while battling through her own trauma — finds herself haunted and hunted.

She is haunted by one of the dead victims and hunted by the psychopaths armed with a camcorder, swords and sickle. Will she survive or be the next victim, forms the crux of the narrative.

Far from the classics, yet literally designed as a torture-horror film, the plot with its insufferable smugness, borrows fundamentals from the maze-arcade, video game Pac Man, where you get three chances, opportunities or lives, before the game is over. This aspect complicates the narrative and makes it an unrelatable kitsch.

Also the psychopaths’ motiveless, irrational, inexorable, impulsive and cruel actions, keeps the viewers baffled. But nevertheless, what keeps you glued to your seat is the tormenting of the protagonist and the narrative teasing its audience with no real suspense, surprises or revelations.

Amped with good editing and sound effects, there are some brilliant jump-scares, clever and effective thrilling moments, but overall, the entire drama, mounted on a juvenile idea, seems forced and silly.

Tapsee Pannu as the traumatised Sapna is convincing in the logical extension of the character she plays. But with the predictability of the plot combined with the silliness of her character, where family dynamics are completely missing, intelligent audience would definitely find the entire narrative lacking heft.

Vinodhini Vaidyanathan as Sapna’s maid Kalamma, Anish Kuruvilla as the psychiatrist, Sanchana Natarajan as the victim Amrita and all the other characters, including the police and psychopaths, are simply perfunctory and stereotypical.

The film is mounted on a fairly mediocre budget, resigned to just a few locations and with a handful of actors, the direction appears careless. In certain scenes, while the interior shows night, the exterior appears to contain broad day light and vice-versa. Also, the dubbing of this bilingual, Tamil-Telugu drama is not up to the mark.

Overall, this thriller isn’t new, smart or engrossing. It has its moments of chill that will appeal to only a mindless audience.