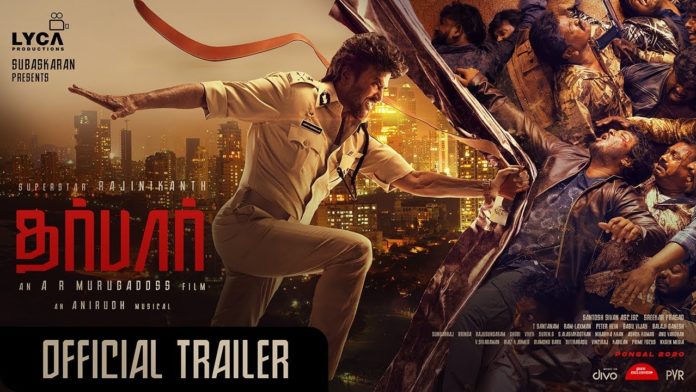 “Darbar” is the kind of film that screams out loud that Rajinikanth, who recently turned 70, is in no mood to slow down, and this fact is established even more strongly via a couple of scenes. In one scene, when Rajinikanth is given an ultimatum to prove he is mentally and physically fit in a span of four days, we see him hit the gym and lift heavy. As funny as it is to see him strain to flex muscles, it’s equally exciting to see him do what it takes to still stay relevant.

Nevertheless, “Darbar” is a Rajinikanth show all the way, and it could’ve been wholesomely entertaining if not for insipid writing.

The film, directed by AR Murugadoss, sees Rajinikanth play a cop named Aaditya Arunasalam, who has no rules or mercy. Like most of the heroes in Murugadoss’s films, Aaditya Arunasalam has to break the law to ensure justice is served. When he is sent to Mumbai on a special operation to handle the city’s drug menace, he goes on a murderous rampage. He gets labelled ‘a murderer’ and ‘a cop with no ethics’ by the papers. As part of the operation, Aaditya crosses paths with dreaded gangster Hari Chopra (Suniel Shetty) and the ensuing face-off between them forms the crux of the story.

“Darbar” has its moments and they are owned by Rajinikanth, who is in his elements. The first half is a celebration of vintage Rajinikanth, and we see the 70-year-old doing everything he can to entertain fans. From singlehandedly taking on an army of henchmen to matching steps to a romantic number with Nayanthara, he makes the generic scenes work with his charisma and energy.

In terms of story, “Darbar” doesn’t bring anything new to the table. It’s a straightforward revenge story of a father who goes after the killers of his daughter. If not for Rajinikanth’s arresting screen presence, “Darbar” would have been even more underwhelming.

As a Rajinikanth movie, “Darbar” plays to the gallery but it isn’t as fun as his last release, “Petta”. Also, “Darbar” desperately attempts to take Rajinikanth fandom up by a notch, resulting in an output that is barely engaging. The film manages to entertain in the first half, with a few solid mass-appealing moments for Rajinikanth. However, it derails post interval and almost gets unbearable towards the climax. At various junctures, “Darbar” sends out major “Petta” vibes but it doesn’t do a good job of adapting.

“Darbar” does not give much importance to any of its supporting characters. Nivetha Thomas, who plays Rajinikanth’s daughter, is the pick of the actors. Her scenes with Rajinikanth are fun and full of life. Nayanthara gets wasted in a role that has pretty much nothing to do while Suniel Shetty, as the protagonist is boring. “Darbar” definitely needed a stronger villain. At no point does Shetty come across as menacing. (IANS)