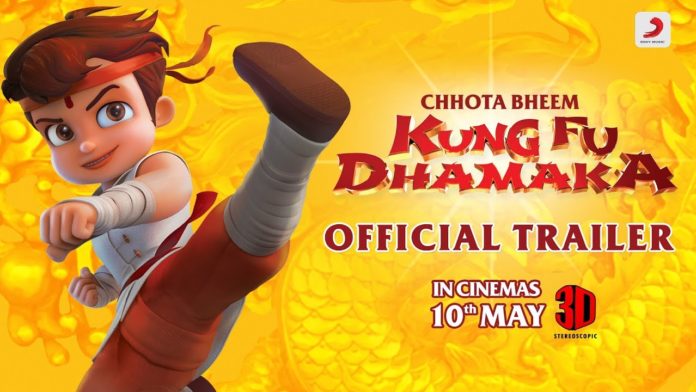 There is an infectious appeal to Chhota Bheem and his numerous adventures. While the Chhota Bheem franchise, with its numerous editions have acquired iconic stature among the young Indian audience, this is the fourth film after ‘The Throne of Bali”, “The Curse of Damyaan” and “Himalayan Adventure” to get a theatrical release.

For those uninitiated into the series, Chhota Bheem and his friends Chutki, Raju, Kalia along with Dholu, Bholu and Jaggu the monkey are constant figures who accompany our saucer-eyed hero on his various expeditions.

This time, they are in China. Chhota Bheem and his friends are participating in the annual festivities in the court of Emperor Jiang. The last day of the festivities also coincides with Princess Kia’s birthday and coronation. We are told that Princess Kia is a blessed child who has the patronage of a mystical dragon, who has the powers to rule the Universe.

Witnessing the festivities which include a Kung Fu Competition, are Princess Kia, her friend Ming and all the other courtiers.

The Emperor’s nephew Zuhu, as an act of revenge for being banished from the kingdom and a part for his nefarious plans, mars the festivities by kidnapping Princess Kia.

The desperate Emperor promises huge rewards to anyone who would liberate his daughter from the clutches of his wicked nephew.

All the participants of the Kung Fu competition along with a courtier and his sons set out to rescue Princess Kia. How they fare in their endeavour, forms the crux of the tale.

What follows is predictable. Chhota Bheem, under the tutelage of a Kung Fu Master, learns new Kung Fu tricks along with a few life lessons. The story is simple and meanders aimlessly through a standard formulaic treatment, making the viewing, a not so exciting fare.

The plot and the screenplay, though laced with verbose exposition, is uncomplicated, smooth and direct with not much emphasis given to the finer nuances of Kung Fu. Nevertheless, the well-designed action sequences are crisp, relevant and lack the fun element that was noticed in the previous Chhota Bheem editions. The dialogues too sound bland and unimpressive.

Visually, the film is brilliantly mounted. Each frame is colourful and appealing and the voices of the ace cast are matched perfectly. The animation, along with the 3D effects, are spectacular with all characters faithfully created, appealing to look at and truly vivacious except for the wispy pink dragon which seems more out of place in this cinematic universe.

Overall, for a theatre released film, fatigue seems to be setting into this series. (IANS)