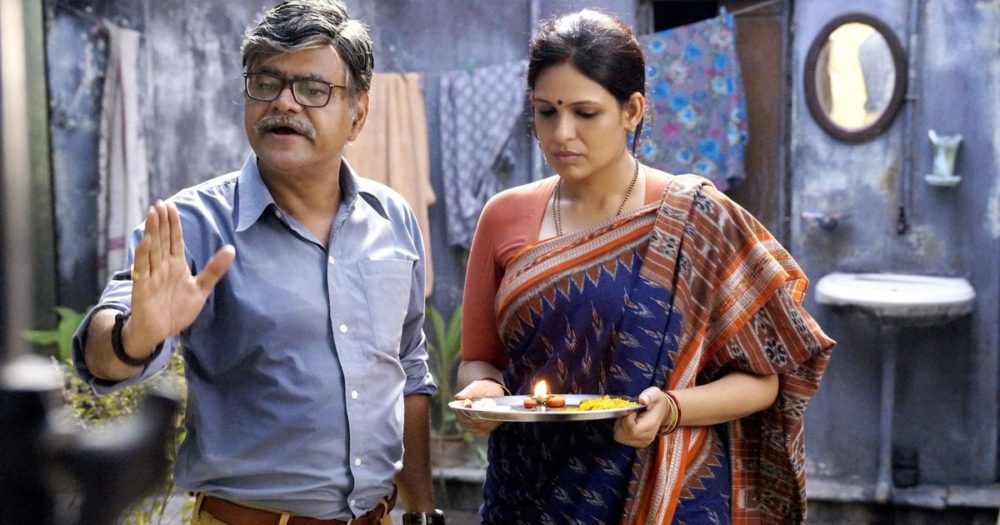 The title clipped from the famous song of the Amitabh Bachchan starrer Khuddar, is so apt to headline this simple, straight-lined, mature love story.

The film is a calibrated primer stating the science of good marriage. It dissects an Indian marriage where the man thinks that expressing the feeling of love is an English concept and one’s duties and responsibilities are love, actually.

Set in Varanasi, the film is the story of Yashwant Batra, a man with an inflated ego and deflated self-esteem, whose solution to every problem of his is ice and water for his drinks.

Considered as a decent man with a job, loving wife Kiran and daughter Preeti, he suffers from the fragile Indian-male-ego-syndrome. So when his daughter after marrying their next-door neighbour Jugnu, against his wishes tells him some home truths, he is broken but unrelenting as his own marriage disintegrates.

The narrative re-emphasises on how distance makes the heart grow fonder. This forms the crux of the tale.

Treated in a simplistic manner with a straight-forward plot, the film’s form is sometimes harsh, sometimes gentle, and ultimately romantic in an adult and realistic way. It views the stages of Yashwant’s relationship with his wife.

The film is engrossing and entertaining purely because of the performances of its seasoned cast. There are moments, especially just before the climax, when the script takes cinematic liberties and goes over-the-top, but otherwise most of the time the narration seems grounded.

Sanjay Mishra as Yashwant Batra is brilliant, but the air of arrogance seems to have slipped into his performance as there are moments that seem artificial and forced. He is not as natural as he ought to be, for a few of his scenes he seemed theatrical.

Left literally without an alternative, Ekavali Khanna as Kiran emerges as a beautiful soul and a gifted performer. Her expressions that she loves her husband and fears that he will bring unhappiness upon himself, are so palpable.

Shivani Raghuvanshi as the nubile Preeti is enchantingly endearing. Her innocence comes through when her boyfriend Jugnu, nudges her with, “we are not running away and getting married, we are just not informing our folks that we are getting married.”

Anshuman Jha plays the charismatic Jugnu to perfection. But it is Brijendra Kala as Anshuman’s dad and Pankaj Tripathi who help in propelling the narrative, making Yashwant realise what love is all about.

Pankaj Tripathi woos you with his soul-stirring performance as Firoz in a crisp three scene role, which forms a sub-plot in the film.

Technically the film is astutely mounted. While Faroukh Mistry’s cinematography, with his smooth camera movements and artistic frames, is brilliant, the oft-seen locales spoil the viewing experience. The setting in Varanasi actually has no significance to the story telling.

The songs and the background score mesh beautifully with the narrative. The sound and visuals are efficiently layered by Suresh Pai’s editing. His smooth transition of shots mostly fluctuate between cuts and dissolves.