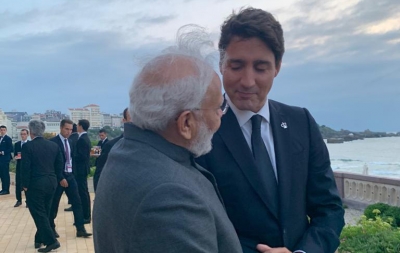 Toronto– The Indo-Canada Chamber of Commerce (ICCC) and many other Indo-Canadian organisations have welcomed Indian Prime Minister Narendra Modis promise to provide Covid-19 vaccine to Canada.

Modi made this promise to his Canadian counterpart Justin Trudeau who called him on Wednesday to discuss various issues, including the pandemic, the economic recovery and climate change.

In a tweet, Modi said that he “assured him (Trudeau) that India would do its best to facilitate supplies of COVID vaccines sought by Canada”.

Trudeau is facing a public backlash because of the lack of the availability of vaccines as both Pfizer and Moderna have either cut or delayed shipments to Canada which has got only 1.1 million doses so far.

Indo-Canadian trade bodies welcomed the initiative by Trudeau to call Modi in the wake of the setback to bilateral relations after Trudeau issued a statement in December in support of the farmers’ stir in India.

Calling it a big development in bilateral ties, Indo-Canada Chamber of Commerce President Vijay Thomas said: “India’s promise to deliver Covid vaccine to Canada is welcome news in the wake of some recent headwinds in our relationship. A big barrier has been broken.”

Thomas said the phone discussion between the two Prime Minister could be the beginning of a new partnership.

Shiv Bhasker, President of the Ottawa-based Overseas Friends of India and Canada (OFIC) said: “This is an excellent development. Any irritants caused by recent Canadian statements about the farmers’ stir in India can now be smoothed out. India is a big market for Canadian goods, agriculture, urea, aerospace parts, water technology, and we should focus on trade rather than issue statements on India’s internal affairs.”

Winnipeg businessman Hemant Shah, who has worked for four decades on India-Canada trade, said: “Trudeau has done the right thing by calling Modi. It has taken decades, efforts, and taxpayers’ money to build our bilateral trade relationship with India. We must not harm it with negative statements.” (IANS)