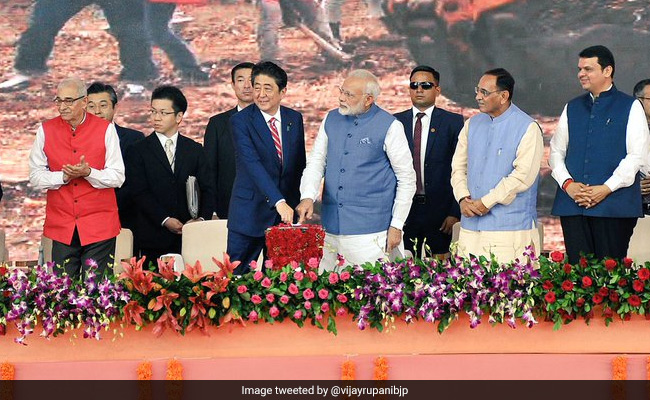 In his address after the ceremony for the 508-km rail line, that adds to the list of major India-Japan infrastructure cooperation projects, Modi said the bullet train would add pace to the country’s development, and would also help in empowerment of the poor.

Modi said that no country can grow if they don’t dream big. “To grow one needs to expand his dreams and decide his strength to achieve that.”

“It’s new India which has to fly high,” the Prime Minister said. “Bullet train is a project that will provide pace to development. Along with new technology it will also bring results faster.”

The Japanese Prime Minister said “a strong India is in Japan’s interest, and a strong Japan is in India’s interest. Today, on this day, that part of the bright future is seen in solid form.”

He said that Japan’s Shinkansen Technology, which will power India’s bullet train project, has changed his country’s economy, society and people’s lives.

Abe expressed the hope that he will soon enjoy the beautiful green scenery of India through the windows of bullet train “when I come back here in a few years”.

Modi in his speech said that with the foundation laying of the project India has fulfilled its very old dream.

“Bullet train will bring employment as well as speed. The Bullet train project is human friendly and eco friendly.”

Modi also expressed gratitude to Japan for providing technology and financial assistance of Rs 88,000 crore at 0.1 per cent interest.

He emphasised that the Bullet train is in a way a big gift from Japan to India. “It is in a way a project being constructed for free. And I will once again thank Japan for helping India with technological and economical support,” Modi said.

The Prime Minister said the bullet train will also help bring people of the two cities together and will be environment friendly as it will reduce the burden of vehicles on highways and reduce fuel consumption.

Highlighting the benefits of the bullet train, Modi said “A new economic system will also develop on this route (Ahmedabad-Mumbai). The entire area between the two cities will change into a single economic zone. A high speed corridor will also help develop India and give speed to economic progress.”

He said the bullet train technology will help in fighting poverty. “There is concern that new technology is meant for the rich only. But technology can also be used for empowerment of the poor. Our aim is to make technology so affordable through maximum use that it becomes associated with the life of the poor,” he pointed out.

The Prime Minister said the high speed training institute for the bullet train coming up in Vadodara, the foundation stone for which was also laid on Thursday, is also important.

Abe in his speech praised Modi as a “farsighted leader”.

“My good friend Prime Minister Narendra Modi is a farsighted leader. And he took a decision two years ago to bring high speed rail in India and to create a New India. And then our country decided to fully support Modi’s vision, culminating in the progress of the project,” the Japanese Prime Minister said.

The high speed rail project that is scheduled to be completed by 2022, has been financed by Japan.

The first tranche of the loan, Rs 6,000 crore, would be released immediately, while the remaining tranches will come after the completion of land acquisition.

About 825 hectares of land would be acquired for the project.

The high speed train would also pass through the country’s longest tunnel of 21 km, of which seven km will be under the sea.

According to Railway Ministry officials, the operating speed of the bullet train would be 320 kmph and the maximum speed would be 350 kmph. (IANS)