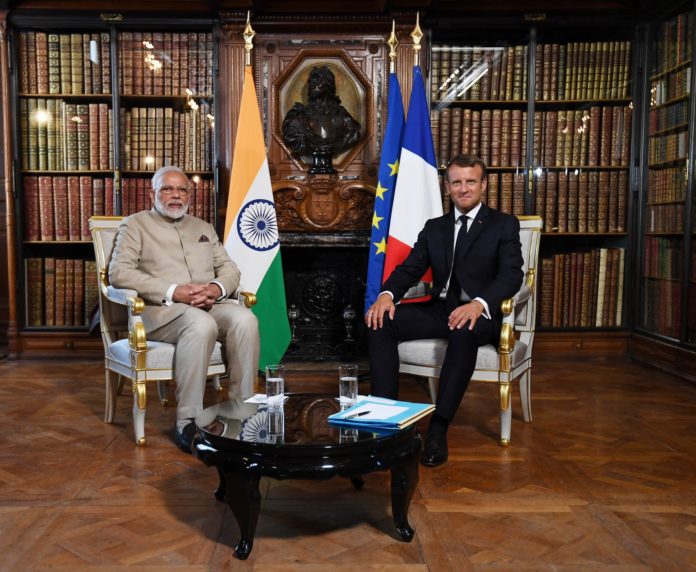 Chantilly, France–French President Emmanuel Macron on Thursday said that India and Pakistan should resolve the Kashmir issue bilaterally and that no third party should interfere or incite violence there, after Prime Minister Narendra Modi explained to him about the changes brought about in Kashmir and that it is part of India’s sovereignty.

After their 90-minute long one-on-one meeting at Chateau de Chantilly, a prime French cultural heritage spot, Macron addressing the media said that: “PM Modi told me about Jammu and Kashmir, and I said that Pakistan and India should resolve the situation, and we do not want that a third party should step in or spoil the situation or incite violence.

“PM Modi explained what are the developments and changes he has brought there in Kashmir, and that it is part of India’s sovereignty, and it important that there is calm, and we should take steps to ensure the situation is not allowed to turn violent.”

He also said that France will deliver the first of the 36 Rafale fighter jets to India next month.

Modi, in his speech, congratulated France for hosting the G7 summit in Biarritz. He said in the field of India’s development, for France has a golden opportunity to participate in the areas of skill development, civil aviation, IT, space and many other spheres. “Defence cooperation is a major area of our collaboration.”

Modi said the first of 36 Rafale jets will be delivered to India next month.

“In technology and coproduction we will increase our cooperation,” said Modi, adding that both sides have agreed to speed up the Jaitapr civil nuclear project.

“We have asked our companies to speed up the Jaitapur project and keep in mind the cost of electricity,” he added.

Without mentioning Kashmir, Modi said: “For two decades we have been taking strides on the path of our strategic partnership. We are dependable partners, and during tough times have understood each others’ points of view and also backed it. President Macron and I discussed all aspects of our relationship,” he said.

Earlier, Prime Minister Modi was accorded a red carpet welcome at the airport where he was received by Foreign Minister Jean-Yves Le Drian.

“India and France enjoy extremely friendly ties and have been working together bilaterally and multilaterally for years,” Modi tweeted.

During his two-day visit, Modi will also meet his French counterpart Edouard Philippe and interact with the Indian community. (IANS)