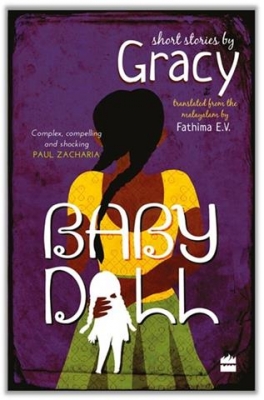 New Delhi– When they were first published, Gracys stories shocked readers with their sexual candour and frank celebration of female desire. She is now widely recognized as one of the most important contemporary writers in Malayalam.

Her short stories, which vary from half a page to novella-length, draw the reader into the world of modern men and women caught in quagmires of desire, lust, jealousy and vengeance – emotions that they often carry even into the afterlife. In these pages we will find: the bitter defiance of a daughter going to her mother’s funeral in her most alluring sari; a contemporary retelling of the story of Draupadi; the sinister coming-of-age tale of a young girl.

“I enjoy mining deep into the recesses of the human mind while writing. Often, my stories tend to be woman-centric, as they can’t help but be fierce responses to male intrusions, and dominance over female bodies,” author Gracy says, adding: These stories attempt to evoke a sense of woman’s identity, even as they try to meet the challenge of exploring diverse themes and concerns.”

“I am looking forward to the responses of new readers who, I hope, would take to my stories in Baby Doll'”, she says.

Gracy’s first collection of short stories, “Padiyirangippoya Parvathi”, came out in 1991. It was followed by nine more short-story collections. She has published three memoirs and a short autobiography. She has also made her mark in writing for children. Her work has been translated into Tamil, Kannada, Hindi, etc. Some of Gracy’s stories have also been translated into English and Oriya.

She has been the recipient of many awards, including the Lalithambika Antharjanam Award (1995) instituted for women writers, the Thoppil Ravi Award (1997), the Katha Prize for the Best Malayalam Short Story (1998) and the Kerala Sahitya Akademi Award (2000).

Translator Fathima says: “I am delighted that this long overdue translation of Gracy’s stories is now set to reach a wider set of readers. Gracy occupies a unique position among Malayali women writers who challenged the seemingly inviolable male bastions in the Malayalam literary field.”

“Though she was initially associated with the ‘Pennezhuthu’ movement (changing the historiography of women’s writing in India and the images of certain writers and writing trends) of the 1990s, Gracy has always preferred to walk alone, rattling conservative readers with her unapologetic assertion of female sexuality and clinical exposure of the slippery slopes of kinship and marital bonds,” Fathima says.

Layered with biblical and mythical resonances, her stories allow the living and the undead to jostle for space, amid an array of lost and listless men and women, bewildered children, lethal predators, and misfits, as much as spunky and sensitive women. They carry a distinctly edgy, sardonic humour and a style which varies from the acerbic, to minimalistic, to lyrical. Gracy’s refusal to romanticise the harsh realities of life is often a calculated affront against the patriarchal values that inform Kerala society, the faultlines of which her writing continues to expose,” Fathima adds.

Fathima’s translation of Malayalam writer Subhash Chandran’s “A Preface to Man” (an artistic meditation on human existence-2016) won the V. Abdulla Translation Award in 2017 and the 2018 Crossword Book Award for Fiction in Translation. She is a co-translator of “Delhi: A Soliloquy” by M. Mukundan. Fathima is currently an Associate Professor at KMM Govt. Women’s College, Kannur, Kerala. She did her MA and PhD from the University of Calicut, and her CertTESOL (Certificate in Teaching English to Speakers of Other Languages) from St Mary’s University, Twickenham. Her poems have appeared in international journals and anthologies.(IANS)